Feet Out or Straight Ahead? | Gokhale Method Institute
Skip to main content
Sign up for our Positive Stance™ Newsletter
Shop Login Free Resources

Feet Out or Straight Ahead?

When it comes to foot position, feet parallel is often regarded as the ideal in our present-day culture. Standing with the feet apart, pointing straight ahead, is also seen as the starting point of a normal and healthy gait. Walking then proceeds along two parallel lines, like being on railway tracks. 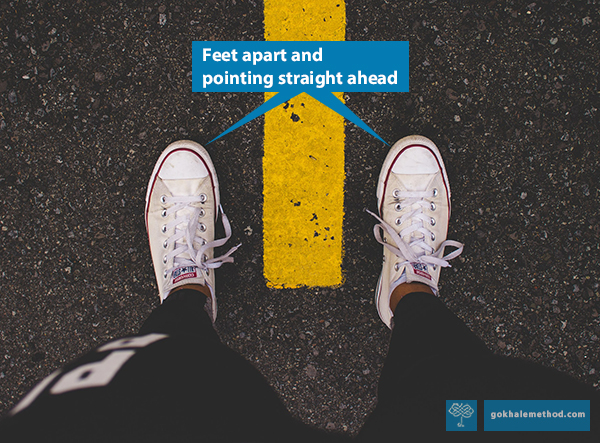 In our culture today, standing with feet pointing straight ahead is regarded as normal, and the best biomechanical option. Unsplash

From a Gokhale Method® perspective, a healthy baseline position for the feet is angled outward 5–15°, or “externally rotated.” Why is there such divergence of opinion—and angle?

Most people learn and then teach feet straight ahead

Feet straight ahead is the model learned and perpetuated by most professionals who are trained in anatomy, whether they are fitness coaches, yoga teachers, Pilates instructors, physical therapists, podiatrists, family physicians, or surgeons. Training regimens, gait analysis, shoe design, and equipment such as elliptical trainers and step machines are also based on this belief.

There’s compelling evidence for feet out at an angle

The Gokhale Method approach to solving back pain and the many other musculoskeletal problems that beset our society is not based on such current assumptions, but on direct observation of biomechanically healthier populations. The Gokhale Method understanding of healthy posture draws on field research among traditional and tribal populations in many parts of the world, where despite differences in culture, age, gender, and occupation, posture remains remarkably consistent—and includes a 5°–15° foot turnout. This same turnout can also be seen in our infants, historical artifacts, and our ancestral images prior to the early twentieth century.

You can see that the feet of this woman in Odisha, India, angle outward.

Let’s look at some more examples of evidence for feet out. 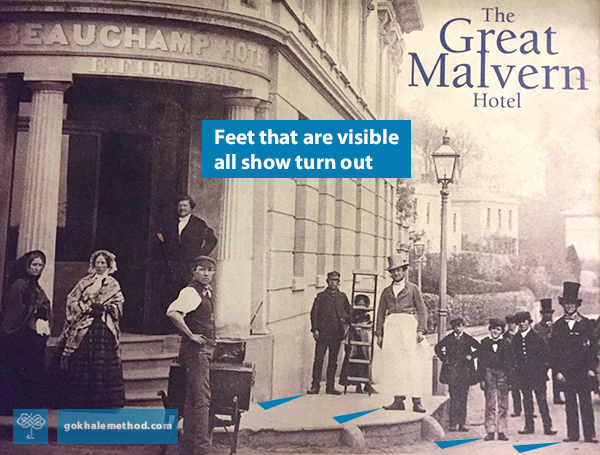 This Victorian photograph decorates a table mat at a country hotel in the UK. The group on the right all clearly show significant external rotation in their legs and feet. 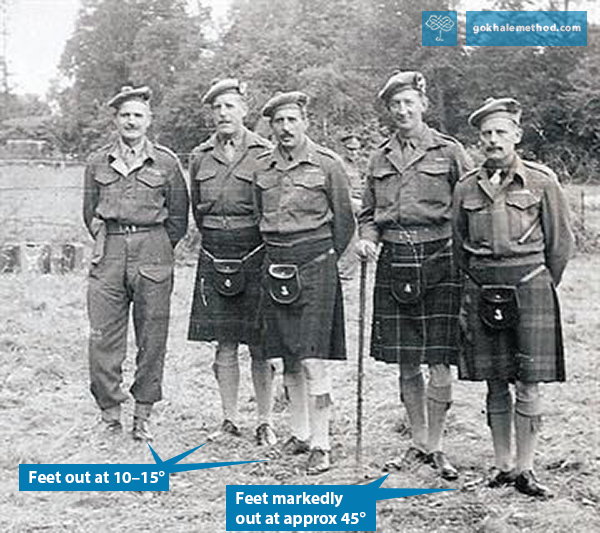 These Scottish soldiers from the mid-twentieth century show degrees of foot turnout that would be uncommon today. Pinterest 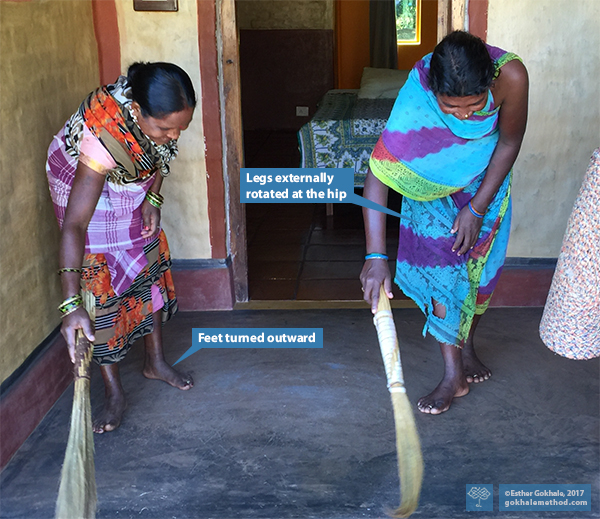 These women in tribal Odisha, India, habitually stand and bend with externally rotated legs, which orients the feet outward. 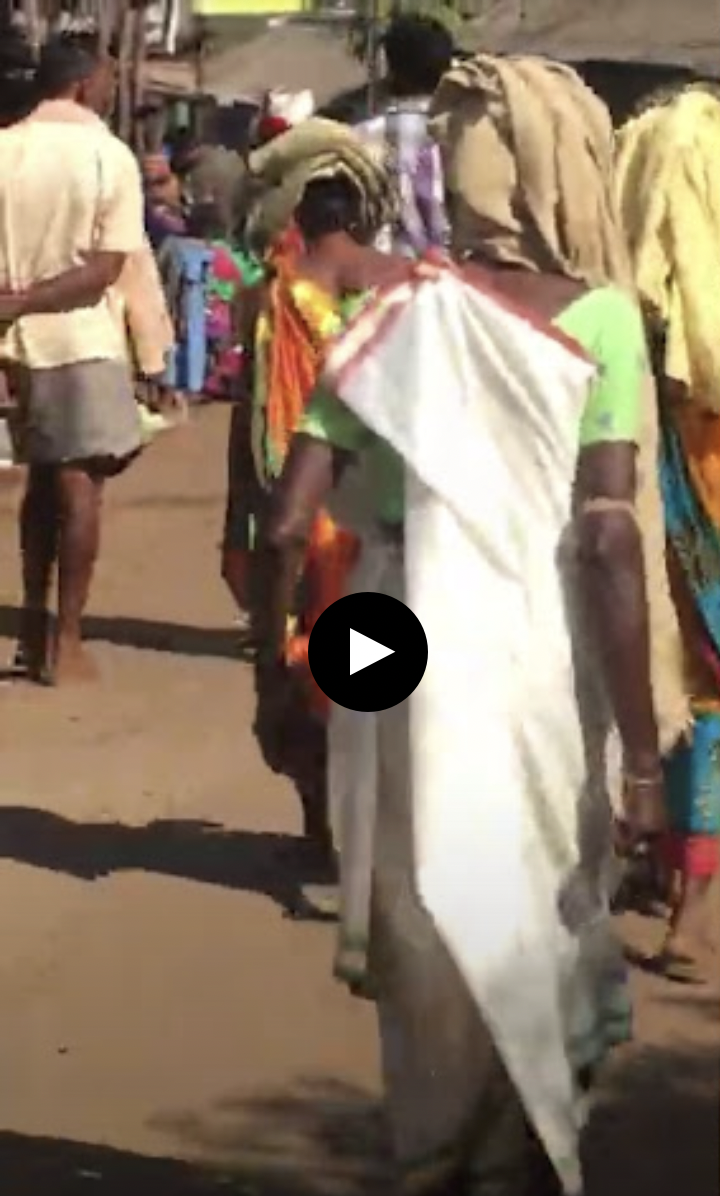 This snippet of video from a market in tribal Odisha, India, shows people walking with feet turned out. 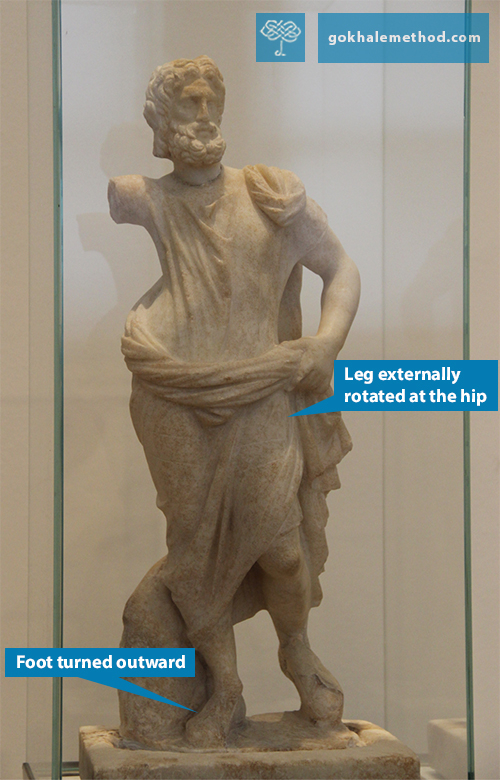 As ancient Greek statuary became ever more naturalistic, it captured the outward angle of the feet, even lifting one foot to suggest walking or a relaxed, “contrapposto” standing position. Marble Statue of Serapis, from Amorgos, 2nd Century BCE, National Archaeological Museum of Greece, Athens. Wikimedia 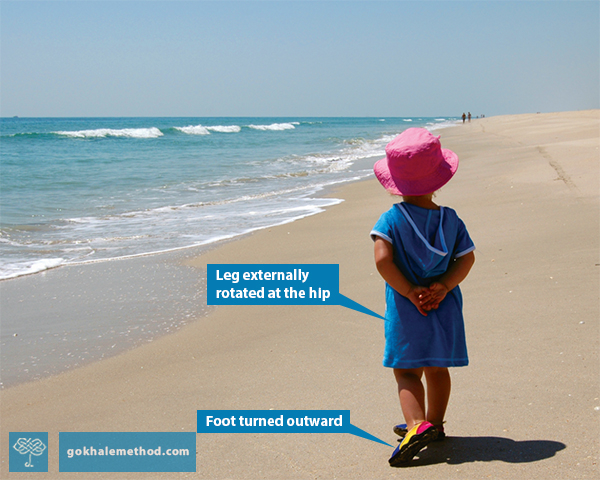 Children naturally externally rotate their legs from the hip joint, angling the feet out. 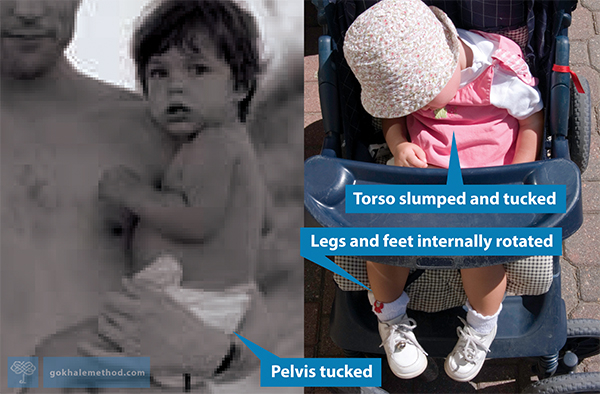 Being held in poor positions or sitting in furniture which tucks the pelvis will counter healthy external hip rotation and cause an infant's legs and feet to roll inward.

Some dance forms, including those based on traditional posture, have evolved an exaggerated degree of external rotation for artistic effect. Several of the base positions of ballet take natural external rotation to an extreme. Such angles also feature in Indian classical dance. These angles work in people who have been raised with them from early childhood but can be impossible or problematic for modern hips which formed while using Western furniture, including seated toilets. Squatting and sitting cross-legged in childhood encourages healthy hip socket development. 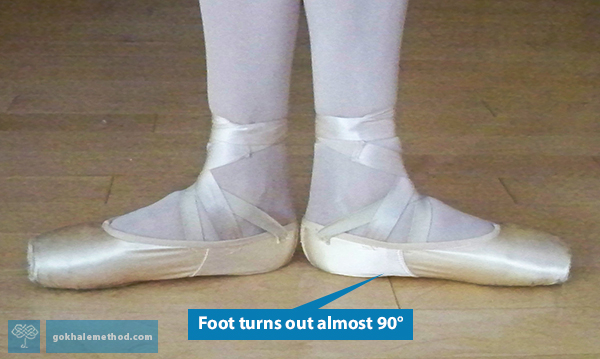 The “first position” in ballet requires considerable external rotation in the hips to turn the feet out at 90 degrees. Wikimedia 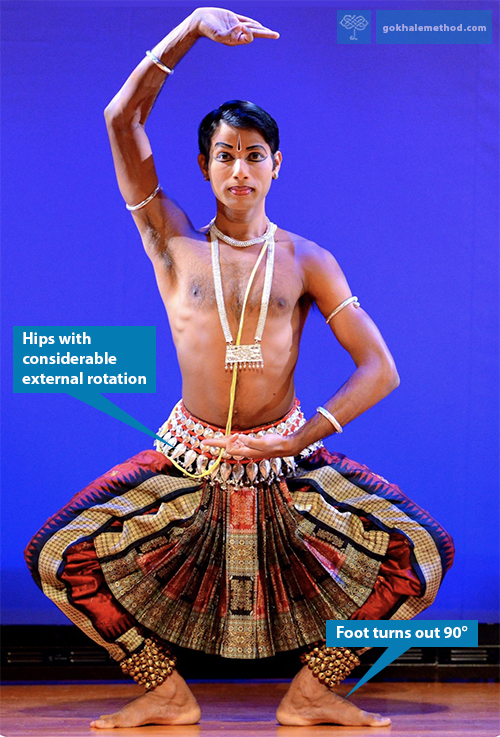 There are numerous foot gestures in Bharata Natyam, a traditional Indian dance form, which require 90 degrees of outward angle in both feet. Pinterest

Soft sand is great for capturing footprints, and those of tribal people will clearly show not only the external angle of the feet, but also how the heels touch either side of a central line. John Carter, one of our teachers in the UK, shares a telling tale:

It was 2010 and I was staying in a beach hotel near a fishing village in southern India. Checking my well-thumbed copy of Esther Gokhale’s book, 8 Steps to a Pain-Free Back, it was instantly obvious who had left their footprints in the sand. Local fisherman left kidney bean shaped footprints, with strong indents from the heel and big toe, and landed with the inside of each heel on either side of a central line. Tourist footprints were wider in the center, indicating lower foot arches, and were usually placed along two parallel lines.

I was traveling with my yoga teacher friends and colleagues. We all admired the grace and poise of the locals, how beautifully they stood, walked, bent from the hips, etc. However, this was strikingly different from the posture that my yoga companions had been taught, in line with conventional yoga ideas. I was eager to discuss the differences, but my colleagues, confused by their received wisdom, continued to repeat what they had learned in training, which included sticking with parallel feet.

Two sets of footprints from Brazil, showing both feet out and walking on a central line. Unsplash 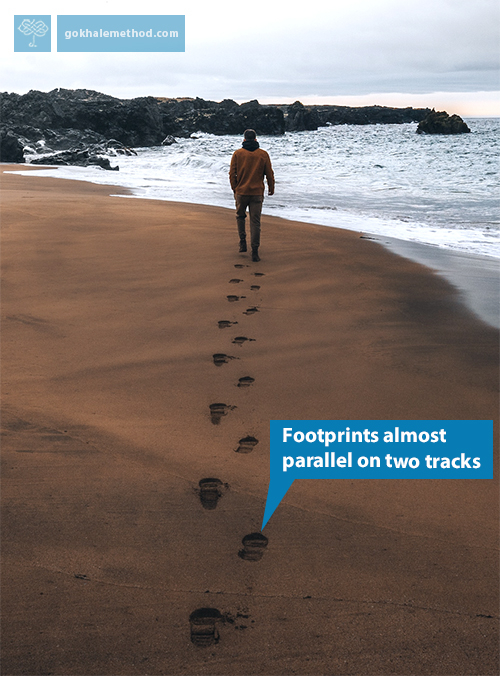 In modern Western culture it is much more common that footprints are straight ahead and run along parallel tracks. Unsplash 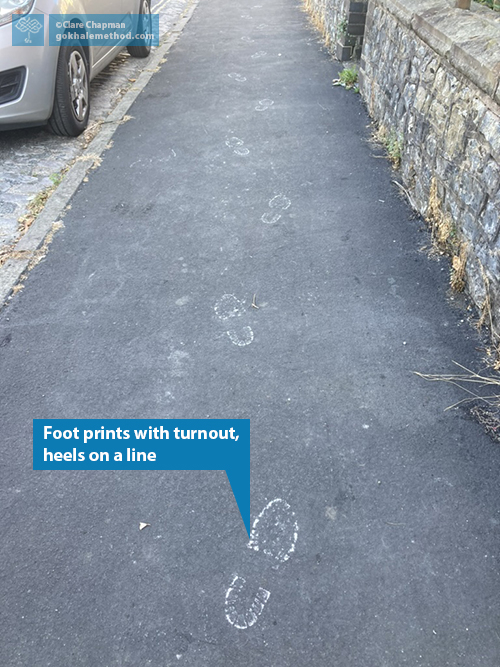 A workman stepped in paint… the prints that his boots left on the sidewalk show a healthy angle of turnout, and that he walked on a central line—this combination is relatively rare in industrialized cultures (UK).

Why do feet point straight ahead?

From our anthropological perspective, having feet straight ahead is actually an inward turn from a healthy norm of “external rotation.” This has come about for several reasons:

What are the benefits of feet out? 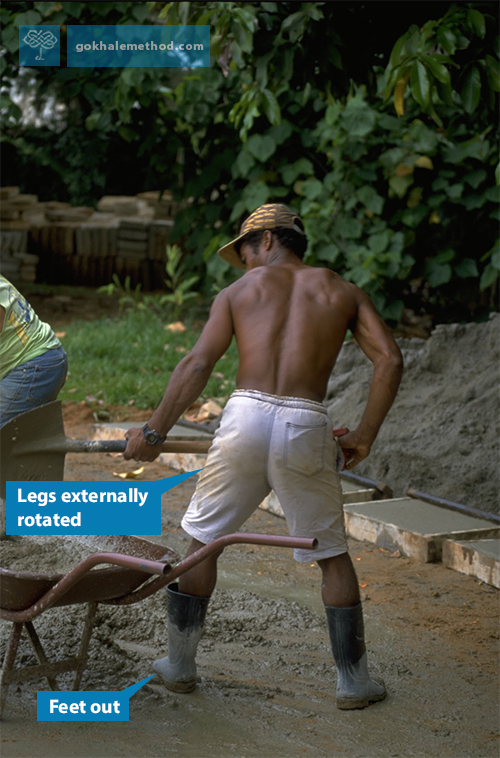 Feet pointing outward adds stability when maneuvering heavy loads, and, with a wider stance, aligns the legs and hips well for hip-hinging. This man is able to bend deeply to the ground.

If your feet are currently straight ahead, or somewhat internally rotated, and you want to move toward external rotation, we recommend you introduce small degrees of change very gradually to allow the tissues and bones of your feet, legs, and hips time to adjust. We strongly recommend you do this in combination with other postural principles taught in 8 Steps to a Pain-Free Back, and our Gokhale Method® in-person Foundations and Pop-up courses, and our online Elements course.

If you would like guidance on any aspect of your posture, including how best to use your feet, consider scheduling an Initial Consultation, online or in person, with a Gokhale Method teacher.
I’ll also be giving a free online workshop on Thursday September 15, 4:00pm PT, Fix your feet with the Gokhale Method. You can sign up here. I look forward to seeing you there.