Samba your way to beautiful glutes

Apart from the fun, the exercise, and the infectious music that's central to this Brazilian dance form, I endorse Samba as a way to promote healthy posture. Among the many benefits, dancing Samba:

If  you're still not persuaded to join our online Samba workshop, watch even just a couple of minutes of this 4-minute video, and I'll wager that many of you will accept my invitation to dance.

What you just saw was a marvelous demonstration of Samba de Roda, or "Samba in the round," which features solo dancers surrounded by musicians and other dancers, singing and clapping and sequentially inviting others to take their turn. An aspect of this form of Samba that holds special appeal as the basis for a training workshop is that learning involves a great deal of observation and imitation, and that those with relatively less skill are among those in the circle invited to join in. Also appealing is the fact that not only are the dancers' feet, calves, legs, hips, and abdomens constantly working, their gluteus medius muscles are also fully engaged. So much so, that before we start dancing I'd like to highlight this important pair of muscles.

To engage, or not to engage (the gluteus medius)...

...can there be any question? 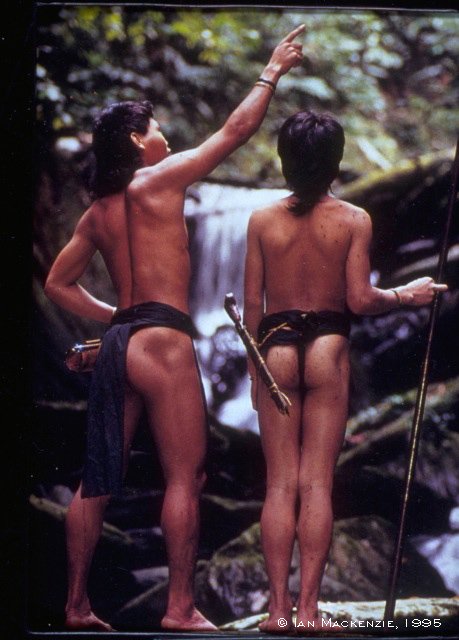 Even when considered from the pure-vanity standpoint of having an attractive, perky derriere, my guess is that most of us would favor the Ubong tribesmen's gluteus medius muscles, which can easily be seen in the upper, outer quadrant of their buttocks just below their cloth belts, to the less distinctive gluteus medius muscles in the photo below. 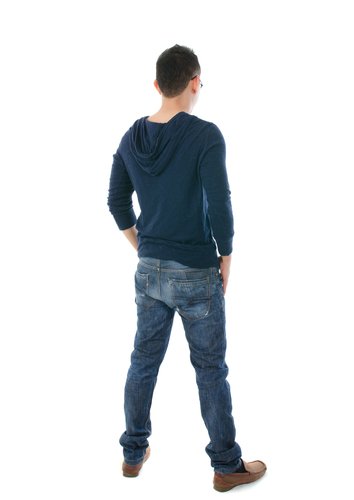 What accounts for this "flat butt" look is the fact that these important muscles are underdeveloped and have not been adequately used.

What are the gluteus medius and why develop them?

The gluteus medius play an essential role in all kinds of natural movement, including walking, glidewalking, running, and samba dancing. In particular, these muscles: 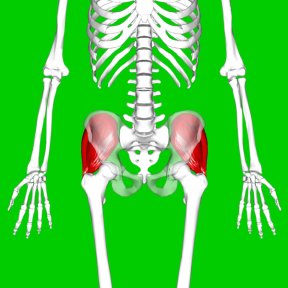 The gluteus medius are shown in red

A couple of other reasons, which we will only touch on here, but will explore in future posts, relate to two painful disorders that arise, at least in part, out of underdeveloped or suboptimally performing gluteus medius muscles:

In a nutshell, a growing body of evidence indicates that gluteal medius health strongly correlates to knee health. If you have good strength in your gluteus medius, your knees will be in better shape, and PFPS is less likely to afflict you. Similarly, if your pelvis is appropriately oriented and your gluteus medius muscles are doing their job, the pyriformis muscles, which lie directly beneath gluteus medius, won't have to pick up inappropriate load and, due to suboptimal orientation and / or hypertrophy, impinge on the sciatic nerve, which exits the pelvis just underneath. 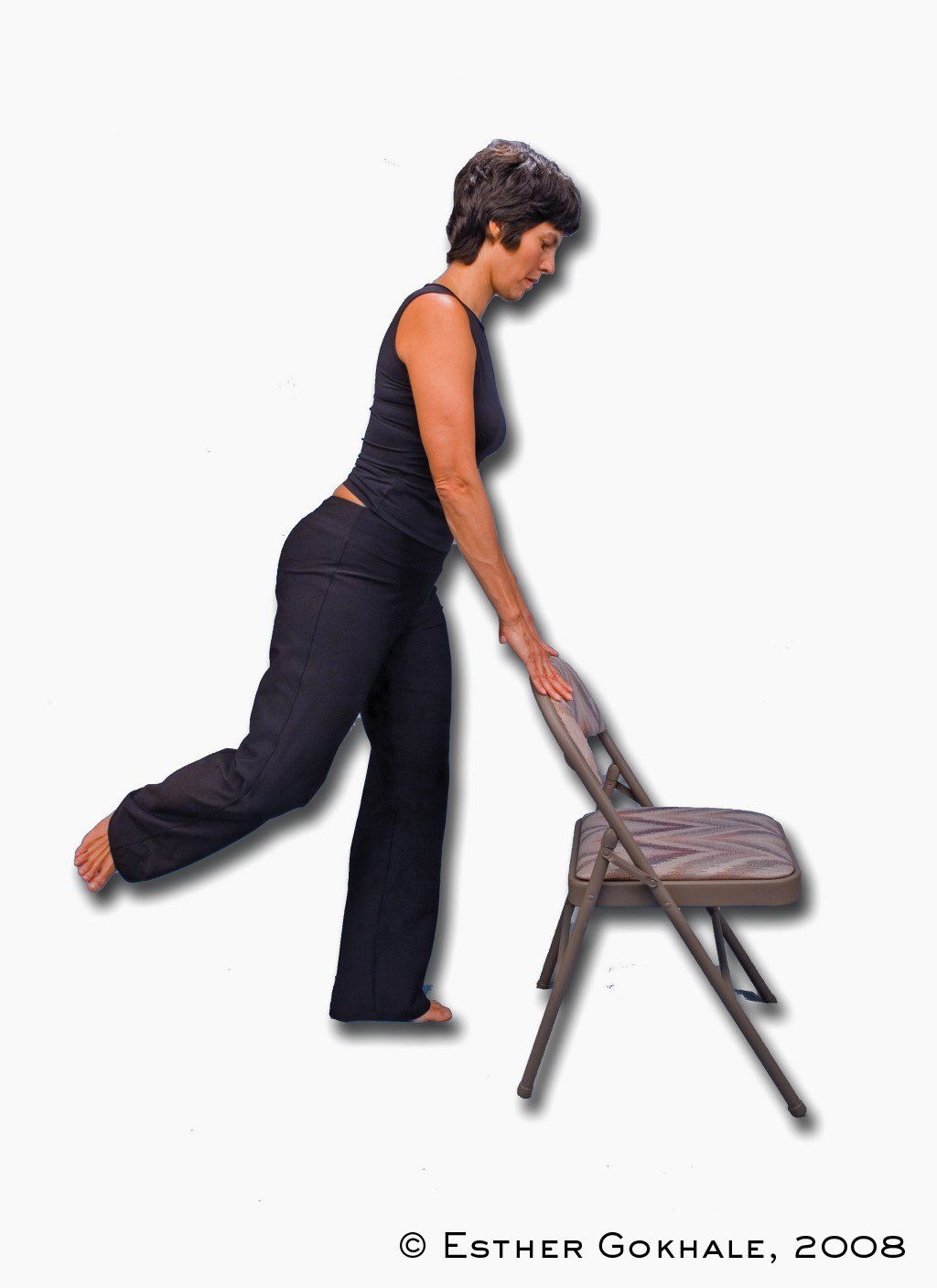 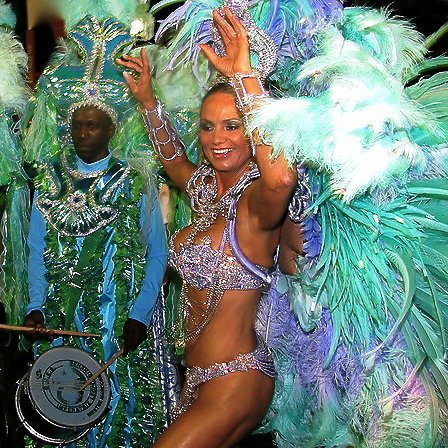 A fun and helpful way to prepare for the teleseminar on Monday, October 21, 2013, is to watch one or more of the following Samba YouTubes, each highlighting slightly different aspects and methods. What's really helpful about this first video is that the dancer starts with pre-Samba steps, emphasizing the side to side movement of the hips. Keep in mind that there are many varieties of Samba, and that this dancer demonstrates just one style. My only cautionary note about this demonstration and the one that immediately follows is that the dancers slightly arch their upper lumbar regions in a way that's not ideal.

Apart from the occasional sound of wind in the microphone, the second video is worth watching because it offers another lesson in the basic Samba step--this time with music.

The third video also highlights a very basic Samba step very similar to the one just above, but the dancer does so without swaying her back. Another nice feature of this video is that the dancer varies the speed of the Samba steps, starting slowly and then picking up the pace to the point where the Samba becomes attractive.

Because some of you might be inspired by pure music, I also suggest that if time permits you check out some of my favorite Sambistas:

And if you join me for our Samba steps teleseminar, I'll share some of these favorites with you.

This samba-dance helped me a lot with my backpain. Just by practising for a few days now. Great tip. Thanks a lot.

That's wonderful news, Karin! I find that between the movement, the gluteus muscle stregnthening, the psoas and calf stretching, the external leg rotation, etc., all kinds of (sometimes unexpected) benefits accrue. Good luck to your continued journey in wellness!

Hi Esther,I have both your

I have both your book and DVD and have found great relief through practicing your methods. My big problem is that my gluteus medius does not activate while walking and i don't know what I am doing wrong.

I have done a lot exercises that target the gluteus medius and while doing them ( including the exercise with chair recommended by you in this article ), the muscle is rock hard, definitely working. If I try to do the walk as you expalin it, with  a small step backwards, straightening the leg and contracting the medius, nothing happens. I mean, like there is nothing there, completely relaxed.

What am I doing wrong ? What can I do to fix it and fix my walking ?

I've seen you mention engaging the glutes while walking, running, dancing, and other movement; in the picture above, it looks like the Ubong tribesmen are engaging theirs while standing as well. Do you advocate this too?