"On a Columnar Self—"

To my eye, the two women featured just below--the vibrant young mother I photographed in Burkina Faso and the powerhouse poet Emily Dickinson in Amherst, Massachusetts--have qualities in common. Do you see what I see? 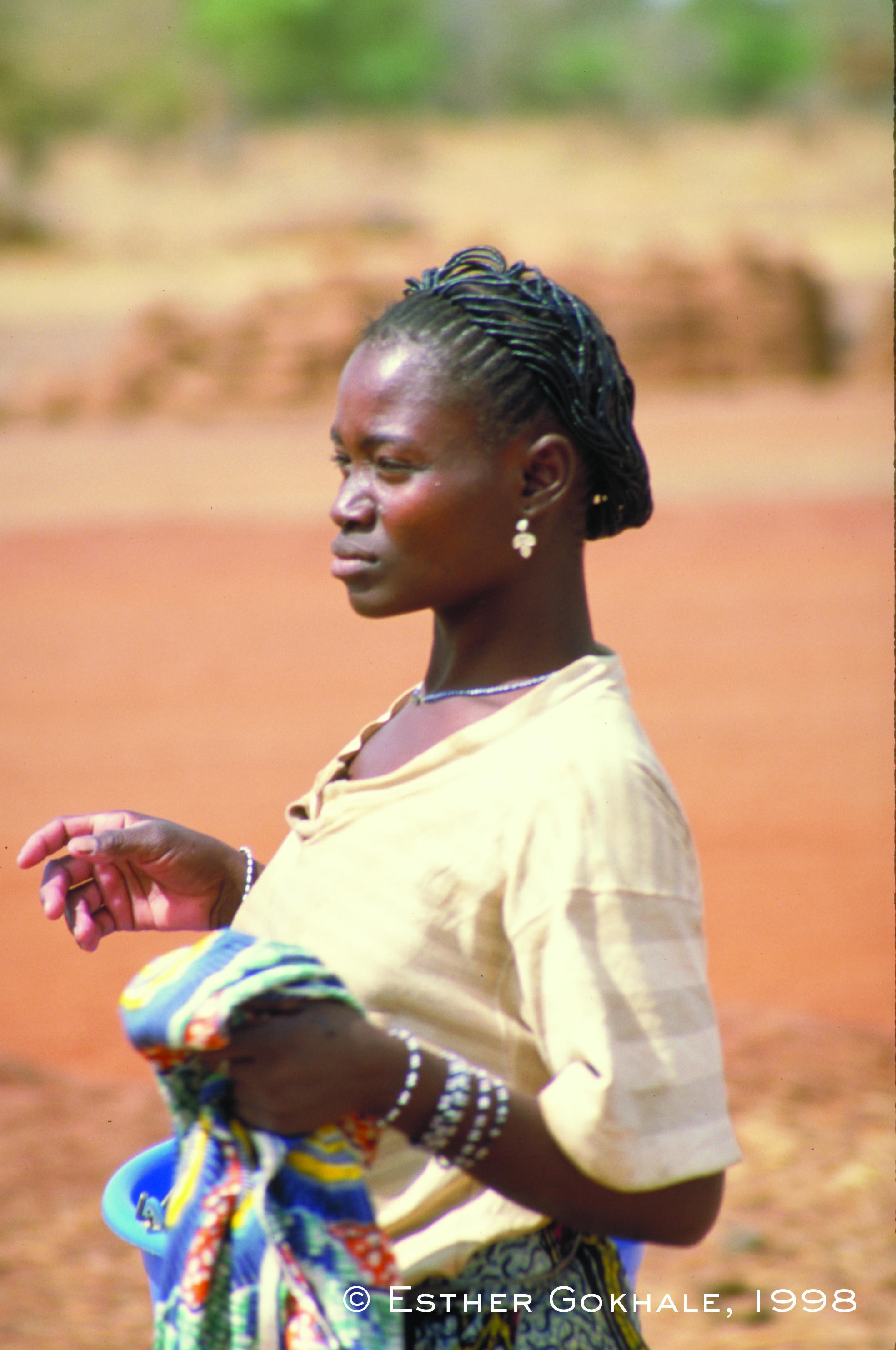 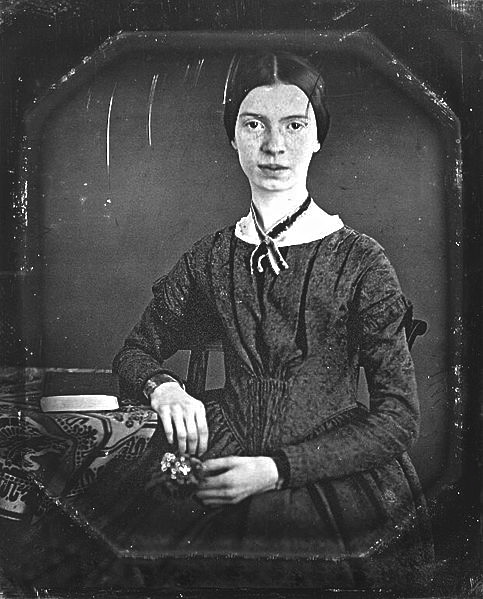 American poet Emily Dickinson sits with posies in a parlor

Although separated by oceans and more than a century of time, both young women model exquisite posture that would serve anyone well, whether writing poetry in the seclusion of a candle-lit bedroom in New England, or washing and hanging clothes out to dry in sun-drenched West Africa.

Because I see poetry in healthy posture and find inspiration in the powerful poems of Emily Dickinson, I will connect some disparate dots and weigh in on the fundamental strengths of the poet's posture, as captured in the 1847 daguerreotype of her at about age 16,  just above. Also, because some believe the woman in the patterned dress, below left, to be the poet (see interesting article here) at age 28 or 29, I will comment on her very similar posture, as well. 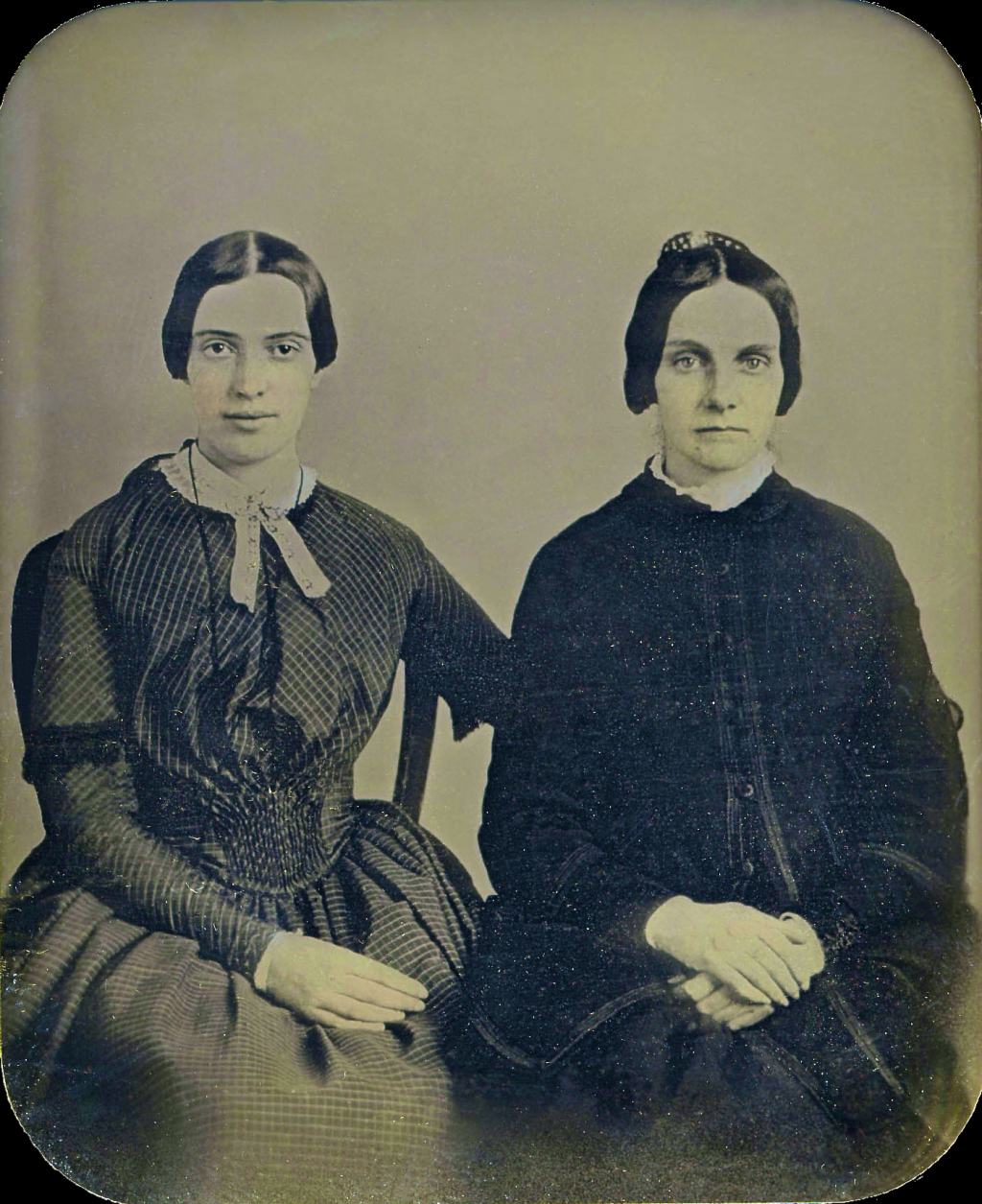 If the woman on the left is in fact Emily Dickinson, then this daguerreotype captures her at the height of her powers

As an aside, because it makes a compelling case that the woman seated above left could be the reclusive poet, please take a look at this silent 30-second video created with advanced Photoshop layering techniques.Beyond the facial similarities, another characteristic the two figures share is expansive and powerful posture. Postural similarities don't hold up as an argument in favor of identifying the poet in her late twenties, however, simply because pretty much everyone sat well at that time. 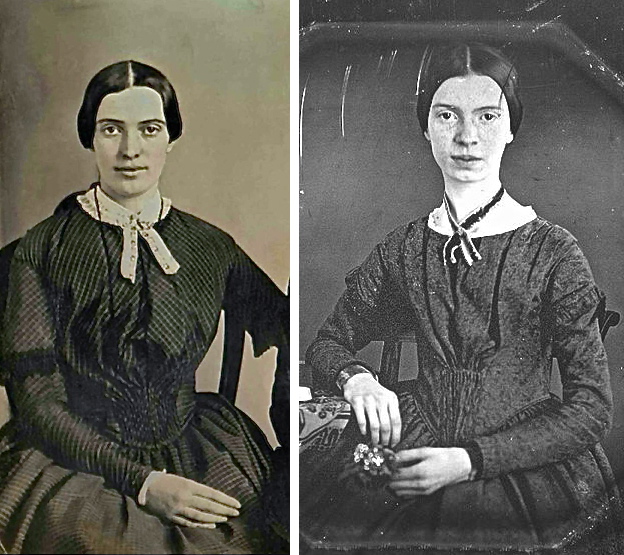 Expansive, powerful posture is characteristic of both portraits

From head to wrist, here's what particularly strikes me: 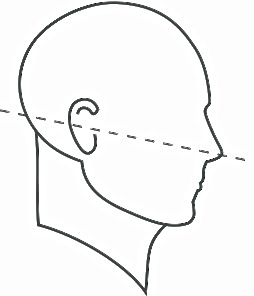 Healthy orientation of the head and an elongated
neck characterize the posture of all of the women, above 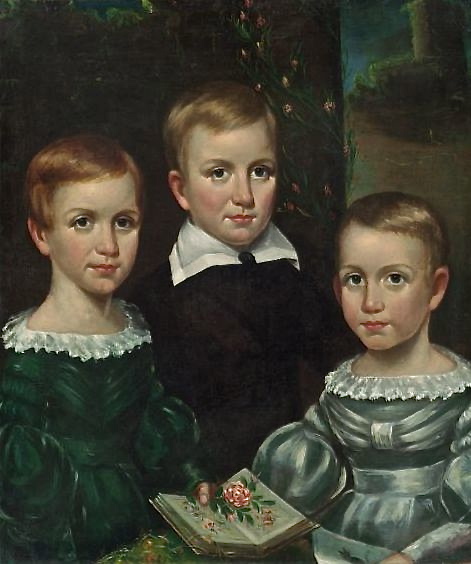 The Dickinson children painted by O. A. Bullard circa 1840;
Emily is on the left 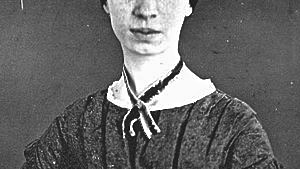 The distance between Emily's ears and shoulders is great;
her shoulders are relaxed 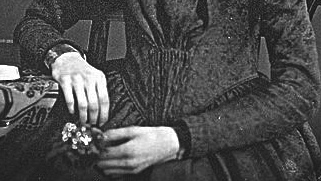 Because no post featuring Emily Dickinson would be complete without including some of her poetry, I'll share two favorites. "On a Columnar Self-" particularly resonates, because I recognize and identify with the subject. The poem reminds me of the time I first sat comfortably. The feeling was very much as if a window had just been opened. I also had the strong awareness that everything I needed was right there, and everything else life brought would be a bonus. I had no further needs because I felt so much delight and self-sufficiency. And that's some of what Emily describes so compellingly in this poem:

On a Columnar Self—

How ample to rely In Tumult—

How good the Certainty That Lever cannot pry—

Though none be on our side—

Caryatid of Erechtheion, a literal example of "a Columnar Self"

All the women shown above are regal and self-possessed. They set the bar for us to rise up to our best selves, and, in so doing, call up this second favorite Dickinson poem:

I’m ceded—I’ve stopped being Theirs—

The name They dropped upon my face

With water, in the country church

And They can put it with my Dolls,

My childhood, and the string of spools,

Baptized, before, without the choice,

But this time, consciously, of Grace—

Called to my Full—

With one small Diadem.

My second Rank—too small the first—

A half unconscious Queen—

With Will to choose, or to reject,

And I choose, just a Crown—

Beautiful, thank you. I'm still waiting to feel really relaxed in a good posture. Every once in awhile I catch myself doing it naturally, so it's very inspiring to read all of your posts.

Yes, yes, keep journeying on. It's worthwhile, and there are treasures along the way.

Thank you for connecting the

Permalink Sangree on May 24, 2018 - 7:50pm
Thank you for connecting the dots between these two women, and also between posture and art. For me, creating and experiencing art is a deeply human act of resilience. I dare say so is primal posture Gokhale Method style! Here is a piece of art I watched that screams Gokhale Method to me. It may not be a perfect example of “glidewalking” but it sure hits many elements of it. https://m.youtube.com/watch?v=xdM71jvcmjk

So interesting. Technically, this walk is very distant from glidewalking. He settles into his forward hip, his arms swing vigorously though his pace is not fast, he lands on a straight knee, and so on - and yet, there's art in this piece, and that we have in common - thank you!