Growing up as Esther’s third child, I was lucky to have been brought up with my posture (almost entirely) intact. The weak spot was my feet. Despite Esther’s encouragement (and sometimes nagging) to wear healthy shoes and sandals, I was pulled by the shoe trends of the day. I wore Converse and Kathy Madden, and as a result my feet were flat and undeveloped. 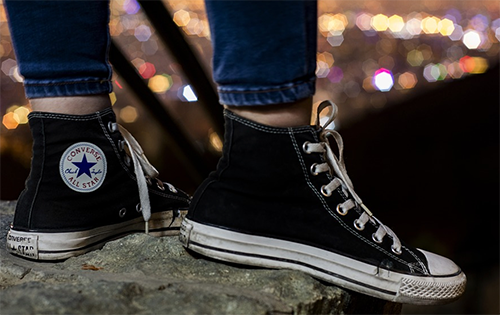 Converse shoes do not encourage a strong arch shape, but often draw youngsters because of their popularity. Photo courtesy Pixabay.

I played soccer, which was a big part of my identity. At some point I started having knee pains that caused me to need to stop playing 15 minutes into the game. Unable to run for any significant length of time, I tested out the goalie role, which actually ended up suiting me quite well. (Note from Esther: Monisha was rated the top goalie in her high school league and helped her club team win a Northern California state championship.) I saw a doctor about my knee problems and was told that my flat feet were part of the problem and that I should do foot exercises. Hmmm. That sent me running back to my mom, who was happy to enroll me in her next Gokhale Method Foundations Course. I haven’t had any knee pain since, even though I ramped up my running level as an Ultimate frisbee player. (Note from Esther: She captained the Stanford Women’s Ultimate frisbee team and led them to a national championship victory. She also won a world championship with Team USA in Lecco, Italy in 2013.) 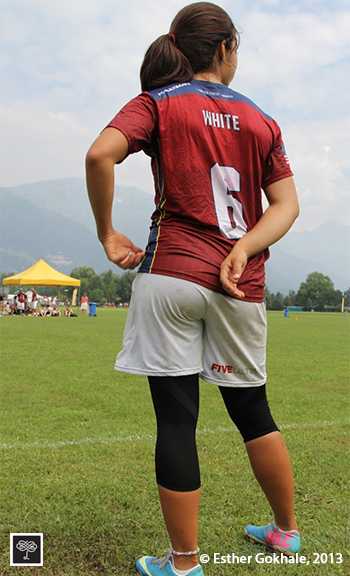 I transitioned from soccer to Ultimate. In 2013, I played with Team USA in the World Championships.

In the picture below, you see my foot arches collapsed and my foot “flat.” All babies start off with flat feet. Ideally, the foot muscles that shape the foot’s arches would be used and strengthened all through childhood, first when learning to balance in standing, then in learning to walk, and later in all sport and daily activities. My foot muscles, partly because of my poor choice of shoes as a teenager, didn’t get strong until my late teen years. 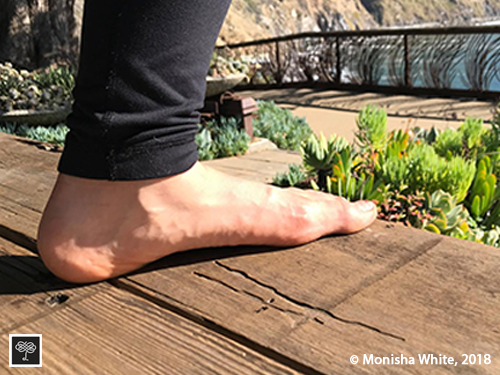 Here, my foot has a healthy kidney bean shape, with intact inner, outer, and transverse arches (note: the arches are extra pronounced here as my foot is up on a bench and unweighted). 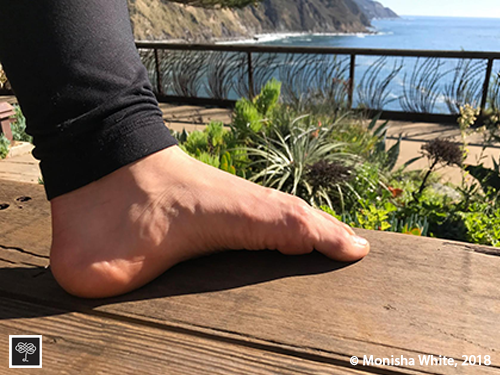 Some useful exercises to help your feet get some natural arch back are the inchworm, “eat the cloth,” and “grab the ball,” all detailed on pages 211-212 of 8 Steps to a Pain-Free Back.

Learning to recreate a healthy foot shape and develop strength in your foot muscles is an important part of restoring healthy architecture not only in your knees and feet, but also in your hips, pelvis, and entire spine.

In most modern lifestyles there are few opportunities to immerse yourself in nature. Esther and I recently taught a workshop at Esalen; the center's dirt paths, meadows, and rolling hills were inspiring in an old, wise way. Visiting places like this helps us reconnect with the lifestyle and pace of older generations. I’m grateful for the help in restoring some of the precious things that our modern culture has lost to the past.

I thought flat flexible zero drop shoes like converse were ideal as they are close to barefoot.

I thought the same as you -

I thought the same as you - that shoes that have the thinnest soles possible are the best choice -- i think converse have much thinner soles than many other types of shoes.  i'm confused by this as well.

It depends on your starting

It depends on your starting point. If you have the kind of feet a hunter gatherer would have from walking on contoured surfaces from the get go, then barefoot is best. If you have lost some structure in your feet and haven't developed robust natural standing and walking patterns, then some support is helpful. It all depends on your feet, your patterns, your knowledge, and the available bandwidth to apply your konwledge.

So if you're at that flat

So if you're at that flat-footed place, shoes with support are a necessary crutch as I begin to strengthen them?  Eventually with continued strengthening that shouldn't be necessary?  What kind of timeframe did Monisha experience improvements?

Learn how to stand bearing

Time frame - depends on many things. But we reach students to #5 after our Gokhale Method Foundations course (can be as short as a couple of days. From there forward it depends on how rigid their feet have become and how well they apply what they've learned.

I am not sure what Monisha or

I am not sure what Monisha or Esther would say but I just came from another blog that talked about foot arches and how important they are.  My understanding is that a child is born with totally flat feet and that the arches develop as the child grows and learns to walk, which is why either proper footwear with good arch support and/or goot barefoot walking are important for a child's development.  When I was growing up a BIG DEAL was made about proper shoes and arches.

If a child wears flat shoes and does not participate in anything that will develop the arches, then the feet don't develop  properly and the rest of the body architecture suffers later in life.  So I would guess this is what this blog is talking about.  However, that being said, some people (from my understanding) just have naturally flat feet and for these folks exercises may be of limited benefit and they should always wear shoes with good arch support.  For most of us, though, exercise and proper foot shape and proper shoes when needed are all we need to do to restore good alignment.

Yes, a baby is born with flat

Yes, a baby is born with flat feet, but also with a natural reflex to grab with the foot when it encounters a stimulus. This reflex lasts for the first 20 months of life. So for the first 20 months of life I recommend leaving babies barefoot as much as possible, and exposing babies to contoured surfaces (dirt, beach, grass,...) as much as possible. This gives babies a chance to develop healthy patterns in balancing and walking on the ground. Once the 20 month window is past, it's a different story. Insoles and the structure of the upper part of shoes can prevent the foot ligaments from getting distended and can be helpful.

What's useful at any age is to learn the natural action of feet and build the strength and habit of using them. Then barefoot walking becomes healthy again.

From what I have gleaned

From what I have gleaned about foot health, arch supports, shoes with heels, tapered shoes, shoes with a toe spring, stiff uppers and lowers and in particular shoes that are narrower at the front -- where the toes should be able to spread out -- do not allow the foot to work the way it's supposed to and can cause foot problems. So, how do you develop healthier feet if your foot muscles are restricted by footwear and most footwear I see out there fit that category? That's where the idea of minimalist shoes come in -- or barefoot walking -- to encourage natural foot movement. Of course, if your feet are flat or in pain some sort of support or toe spacing will be necessary -- at least initially. In my experience finding the right balance between unrestricting footwear that supports and learning how to strengthen the feet/arches at the same time can be a challenge.

You're totally right about

You're totally right about most footwear being abyssmal, but there exist shoes that have a decent toe box, a bean-shaped last, and other helpful features. These are the shoes I am referring to.

I really have trouble keeping

I really have trouble keeping the bean shape while also keeping my toes spread --any tips on this? I have an outer bunion that seems to have gotten worse as I was trying to follow your instructions, I have been using correct toes to keep them spread and that has helped a lot but still have trouble with the shape and arch.

If doing the bean shaping

If doing the bean shaping throws the weight to the outer part of your foot, you want to move your ankles to take that weight off the outer arch.

We're not proponents of spreading your toes in a sustained way (only occasionally as a stretch). It tends to undermine the metatarsal arch. That said, we haven't seen your feet, so we can't really know what is happening. Try to see one of our teachers - they will be able to give you input with a Gokhale Method filter.

It's now two years later, I

It's now two years later, I hope this thread is still accepting comments.  Esther, I would love to find a shoe that fits your description of "shoes that have a decent toe box, a bean-shaped last, and other helpful features."  I have no idea where to start looking.  Can you recommend anything?  Thank you.