“Ishi no ue nimo sannen” is a Japanese proverb that roughly means “perseverance prevails.” Even the coldest stone will warm up after someone has sat on it for three years — so the saying goes.

So far, my three-year Gokhale Method journey has been all I knew it would be — and much more. When I first heard about the Gokhale Method (on NPR), the blend of art, cultural anthropology, and physiology seemed like a perfect way to combat the ravages of what time, gravity, and bad alignment — despite my best efforts — had wreaked on my body. 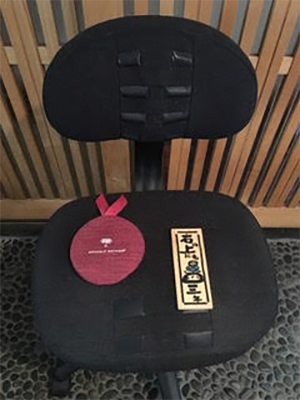 I've kept the Japanese proverb in mind during my Gokhale Method journey.

The negative effects from two decades-old untreated shoulder injuries and a thoracic spine injury from a trampoline accident shortly after I went to Japan in 1972 to teach ESL were starting to add up. Even though I never considered my pain debilitating, it was chronically irritating and noticeably limited my range of motion. 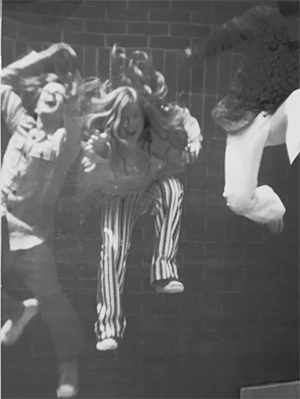 A trampoline accident in 1972 caused a thoracic spine injury.

I had seen relatives on both sides of my family tree corkscrew down several inches by the time they reached their mid-90s and had noticed how it affected their breathing. The Gokhale Method seemed like the perfect vehicle for overcoming gravity and moving my body through space in the most erect, effortless way possible for as long as possible.

Since 2015, I have continued to build on my successes despite losing most of the vision in my right eye when I had a CRAO (eye stroke) in the fall of 2015 and having my left hip replaced in July 2017. In both cases, having better posture was a huge benefit during the recovery process. 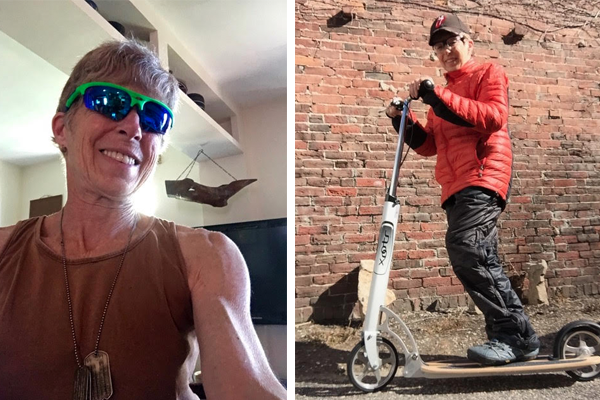 After my CRAO, I got a pair of eyeglasses that made a world of difference (left). My Xootr helped me get around quickly (right).

I saw my hip replacement as the perfect opportunity to work on my alignment. I also knew that I would need lots of bodywork and was looking for an acupuncturist/energy worker to address some major blockages. I truly hit the jackpot since the local Gokhale instructor in the Boston area, Quigley Raleigh, is not only an acupuncturist but also lived in Japan, speaks Japanese, and understands my experiences with “Ki” from the Japanese perspective. We have made fabulous progress this past year and most importantly are still on a positive trajectory. 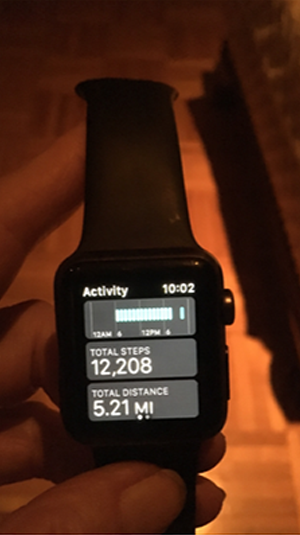 Just two months after my hip operation, and shortly after beginning work with a Gokhale Method teacher, I was able to comfortably achieve my goal of walking five miles in a day.

Last July, I threw my dance phobia to the wind and signed up for Esther’s “Posture-Dance Connection” course at Kripalu. I am now on board with dance as a wonderful adjunct to my Gokhale practice.

In 2017, I became interested in the musical bones and wondered if learning to play them might help with posture. Musicologically,  the bones are attributed to the Scots-Irish who settled in Appalachia. The bones, together with the banjo brought over from Africa, were part of the very roots of American music. Perhaps they resonated with me since I am of Irish descent and remember the sound from childhood? 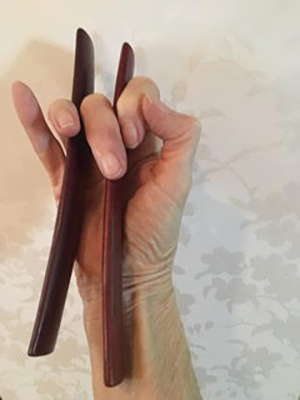 The bones are simply two pieces of wood — one held stable and one swinging freely. The sound is produced by the action of your wrist (as when turning the ignition of a car or flicking a whip) or a combination of your wrist and elbow (like a windshield wiper) while keeping the shoulders stable. I thought they could serve as a primitive posture tracker, since the better your posture and hand position, the better the sound that is produced.

I think the bones work very well with the “ratcheting” of the shoulders concept in the Gokhale Method. I use them to ratchet and fine tune myself into better alignment and to gently coax some of the kinks out in a fun way. They can work with yoga poses and meditating, as well as dancing. Here's a sample:


When people ask me why I continue to practice the Gokhale Method, I tell them I like to think of the Gokhale Method as the Seinfeld of posture methods. Just as Seinfeld was said to be “the show about nothing” at first, the Gokhale Method might appear to be about nothing. You are simply learning to sit, stand and walk. But you are learning to do these daily activities in an efficient manner throughout the day doing whatever it is you might find yourself doing. You can even do it while you sleep! So, far from being about nothing, it’s actually about everything….and that’s really something!!

My first three years of Gokhale Method practice could not have been scripted better. I had my picture taken with Esther at Kripalu while sitting on a Gokhale Pain-Free™ Chair holding my proverb. I must say, it was much more comfortable sitting on a chair than it would have been sitting on a rock. Perseverance prevails!! 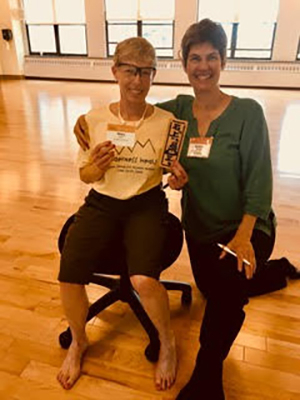 They really are quite fun…

They really are quite fun… And like the Gokhale method, they can be as simple or as complex as you choose...YouTube has lots of videos… I recommend Dom Flemmons (solo or with The Carolina Chocolate Drops) Or a musician from Maine, Kafari.

A lovely piece of writing

A lovely piece of writing that reads so well one might get the impression your journey was easier than it really was. The Gokhale method clicked with you and you were determined enough to not give up, and your success is all your own. As your old friend who has watched you and listened and marvelled all along the way, I am in awe of your ongoing achievements.

Thank you to Esther for bringing this knowledge to the world. But more than that, congratulations to you for making it all work for your own benefit and for having the humility to show the world what is possible. Much love. J.

Thank you for your support

Thank you for your unwavering support spanning so many miles and so many decades....love...M.

So great, love the dance

So great, love the dance moves Mary! And the Seinfeld analogy is so spot on. It’s about nothing and everything! Kudos to you for pushing through all these challenges - that is really inspiring :)

Thanks, Dave...I just ordered some actual cow bones from Ireland with Celtic designs inked on. Learning the history of the bones and the banjo was something I wasn’t expecting but I am enjoying as much as figuring out how to play.

You're a big inspiration to

You're a big inspiration to me, Mary. I love the way you own what's important in your life. It's so easy in our culture to lose sight and value for the little nothings that add up to everything. Not only do you recognize what's valuable to you (when it's not fashionable or mainstream or rewarded), but you're also disciplined to practice it, and confident to share with others. Kudos and gasho (thank you)!

”Esther...thank you for the vote of confidence. I really do believe the beauty of your method is that it can be incorporated seamlessly into your life in whatever way you choose. I had pieces of my posture puzzle, but not the whole picture. Once I discovered your method, as one of my friends said, “You were always a little crazy, but now at least you have a Gokhale Method to your madness.” 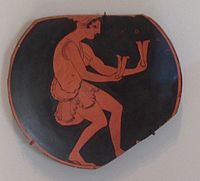 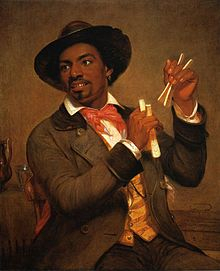 Esther....Here are a couple of examples I found of the bones in art.  Posture aside, you can see evidence of the ancient history of the musical bones on this shard of poetry.  The musician in the painting seems to have rather good posture.  I can almost hear him playing as I look.

So cool! Thanks for hunting

So cool! Thanks for hunting for these. About the first one, it's perfectly okay for someone to choose tucking the pelvis and rounding the shoulders as part of artistic expression. It's only a problem if the person is still "in the woods" vis-a-vis inflammation and damage at those sites, or if this becomes a baseline position. Of course, given that our baselines are often skewed, it's a wonderful treat to get inspiration from someone like the subject in the second picture.

Thank you, thank you!!

Thank you for sharing your

Thank you for sharing your story! Your joy, creativity and discipline are truly inspirational!

The best dedinition of craziness that i have encoutered is that from Echart Tolle: you are creazy in the measure you can't choise when thinking and when not.

In this case it's about be ordinary or EXTRAordinary...

... also for sure you are a little extraordinary!

Wonderdull job done, keep going, i will too!

Lovely, Allessio...let's move forward one bean-shaped foot at a time...Mary

Thank you so much Mary for

Thank you so much Mary for this beautifully told story! I am translating it in French right now for my blog here in Québec, Canada and was fascinated during the whole process! I always love seeing you in Esther's chats, you are a so inspiring. Viva crazy wisdom like yours! 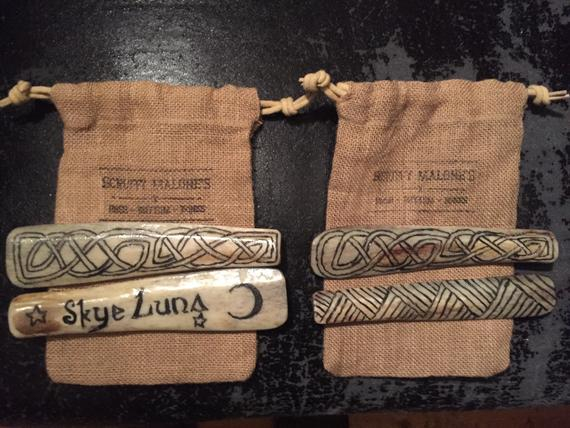 Esther...this image is from the ad from Scruffy Malone's in Ireand.  I got one pair each of the ones on the right. I was surprised at their weight (127 gms) compared with my original wooden ones (51gms.)  I'm looking forward to experimenting  with creating different sounds with different grips while working on my inner corset and loosening my shoulders.  Musculoskelletally, once you get the angle and momentum working right, your whole body/or part you are working on follows the line you create naturally. At least, that's how I feel.  Musically, I'm still trying to understand how to create the most basic rhythms with consistency and just having fun.  I have several  objects made of bone that I treasure and am happy to have these amonst them now.

These are so beautiful!

These are so beautiful!