The recent Kebara 2 Neanderthal find (nicknamed “Moshe”), with very well-preserved vertebrae and ribs, was a particularly exciting find. Patricia Kramer, professor and chair of anthropology at University of Washington, has created a 3-D image deducing what the shape of Moshe’s thorax must have been, and there are some surprises. One surprise is especially interesting: the Neanderthal lumbar spine was practically straight! This was a great surprise to the researchers since they were expecting that Neanderthals, who are quite closely related to our species, would surely have the same lumbar spine shape as ours. The researchers’ starting point is the conventional understanding that modern human spines have a considerable amount of curvature throughout the lumbar area. So discovering that the Neanderthal lumbar spine is straight was shocking to them. For those who subscribe to the basic tenets of the Gokhale Method, though, discovering that the Neanderthal lumbar spine is straight is not so shocking. It reaffirms that our close relatives, the Neanderthals, have a similar lumbar spinal shape to what’s actually natural to us (as the researchers would have expected); it also adds to our conviction that the paradigm of the S-shaped human spine is overdue for an overhaul to the J-spine paradigm. 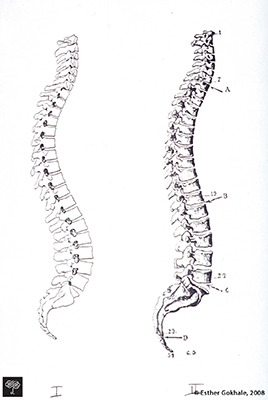 The change in spine depiction from a 1911 textbook (right) to a 1990 one (left) shows that if we travel back in time just a hundred years, straighter spines were thought to be more natural.

A similar situation, described in 8 Steps to a Pain-Free Back, comes up with the Laetoli footprints. These show two individuals from 3.7 million years ago walking on a straight line (i.e. the inner heels of both feet touch, but do not cross a line). This finding is used to argue divergence of our species from the species that left behind their footprints. The Gokhale Method claims that walking on two lines is not a natural part of being human, but rather a very recent artifact associated with humans in the industrial age. We have “forgotten” how to walk! One doesn’t have to go very far back, or very far afield, to find modern humans who consistently walk on a line. So the Laetoli footprints instead become evidence of proximity of their ancient owners to us, rather than distance. 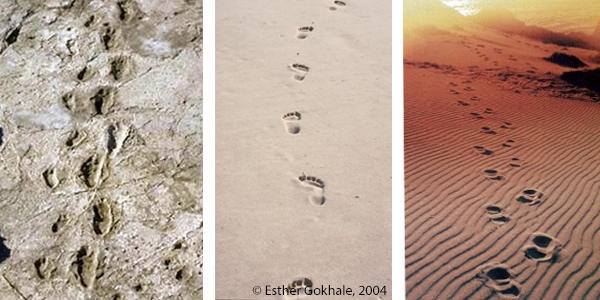 The Laetoli footprints (left), dating back to 3.7 million years ago, demonstrate walking “on a line.” This pattern can still be seen in traditional places like modern Brazil (middle), whereas people in industrialized parts of the world have developed a style of walking “on two lines” (right).

It’s not surprising that characteristics as basic as spinal shape and way of walking would be preserved across very long periods of evolutionary history. So this finding is actually not shocking on this score. What’s shocking is that we still don’t know the natural shape of our own spines — and that it takes a Neanderthal to set us straight!

Interesting findings! I feel though that such findings are more of an argument for devolution rather than evolution, since supposed/said changes to the general shape of moderns’ backs are said, in the Gokhale method, to be detrimental to health (causing pain etc etc). I would find it easier to digest these articles if instead of making references to evolution (implies improvement over time) it could instead be referred to as devolution, since that term is more in harmony with the kinds of points you’re trying to get across.

Also, if the laetoli

Also, if the laetoli footprints from a supposed time period of 3.7 million years ago and the footprints of a modern Brazilian are alike, that also sort of illustrates to me that humans have not changed that much in said millions of years. Kind of like a mosquito encased in amber from who knows how long ago, and a mosquito of today. The human is still a human and the mosquito is still a mosquito.... if modern technology has led to a deviation from the norm that has been in place for so many years, almost like a harmful mutation... it’s more of an argument against evolution than for it. So in my mind articles like this would be more scientific not to make so many references to evolution (as if it’s a foregone conclusion) when really all arguments and evidence being presented is pointing to the fact that it’s better for our health if we were to try not to “evolve”.

Talking of our great

Talking of our great-grandparents' J-spine, the idea of evolution isn't all that wrong looking at the Laetoli footprints, recent Neanderthal finds and unadulterated walking habits in various places such as Brazil, Burkina Faso, India. Once a skeletal/muscular setup has evolved into a kind of harmony to ensure long-term functionality, it remains on that level for ages, literally. This means our upright stance was well achieved and supported by Laetoli times. So why change it when all we get from the modern slump is back pain?

Yes, it does appear that we

Yes, it does appear that we have some good things going in lumbar spine shape and foot placement in gait, judging from how conserved these are over long periods! Now to return home to our natural ways...

I should like to add that, contrary to the popular sketch of the ape gradually rising into an upright position to end up being man, the transition from walking on all fours to fully bipedal must have been a fairly sudden affair.

It is difficult to imagine proto-human creatures walking or running about with backs bent by 80 - 70 - 50 -40 -30 -20 -10-degree angles for hundreds of generations before attaining anything close to 0°.

So it is either a quadruped, at times being busy on two legs for certain activities before lowering itself back into the comfort and stability of the four-foot stance, or the bipedal runner able to scan its environment across the high grass and lift a rock or stick above its head to throw at prey or predator. Even for collecting grubs or tubers from the ground, bipedals wouldn't find it comfortable to hunch for hours on end.

Dear Esther, Did you send

Did you send them this? Or a reference to your book? Because according to the article, these researchers have no clue about real human anatomy, they ONLY know the anatomy of very modern distorted spines.

Since this skeleton appears to be kept a few minutes' walking from my home (at Tel Aviv university), I even thought I'd hop over and show them your book, but wouldn't it be better coming from you personally? 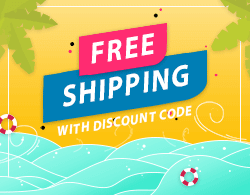 Ready to set sail on your posture journey? Sign up for our Positive Stance newsletter for a discount code to receive free shipping on domestic orders over $30! Offer valid through Aug 21, 2022.