The Gokhale Method is Nonnegotiable

At the beginning of the pandemic, my tween daughter was the dancer in my house. When her in-person hip-hop class was canceled, she quickly turned online for inspiration, showering me with her 30-second Tik Toks.

I was amused, but resolute that dancing online was not for me. I had my own exercise regime, at the heart of which were a series of Pilates-based exercises that I had incorporated in the hopes of healing a nagging injury.

But now, 16 months into the pandemic, I’m dancing online too, maybe even more than my 12-year-old. This is thanks to Esther Gokhale and her unbelievably fabulous community who, like me, wanted to find a safe, therapeutic, and fun way of exercising after injuring our backs.

I first heard Esther years ago on a podcast and subsequently checked her book 8 Steps to a Pain-Free Back out of the library. I remember being especially interested in the pictures of women holding their babies so comfortably; I had recently given birth, and I tried my best to imitate the women pictured. 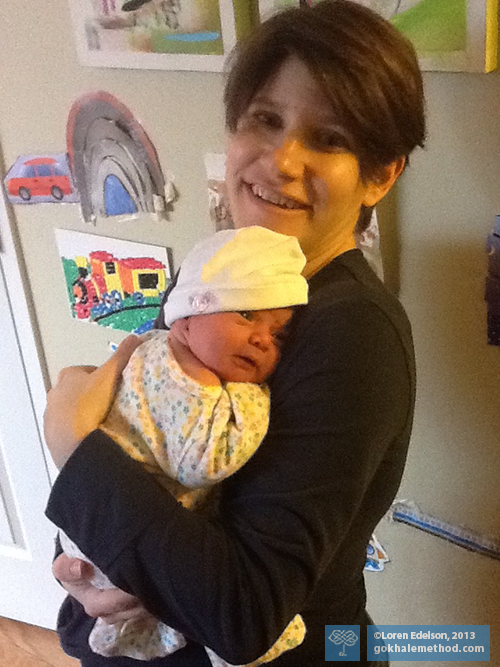 Me with Baby Yael in 2013. I now see I had a very pronounced S-shape curve.

From reviewing pictures of myself during that time, I see now that I did a poor imitation, but at the time I didn’t have any pain, so I returned the book to the library.

However, last November while experiencing non-stop back pain, I purchased the book, which led me to Esther’s website and one-on-one coaching. Six weeks later, after completing the Elements course, this is what I wrote to friends and family in my 2021 New Year’s letter:

I’ve been relearning how to walk, stand, and sleep over the past six weeks. This is what one does when she becomes so desperate for relief from unrelenting sciatica, the kind that starts in the buttock and runs down to the calf. It all began with a yoga injury in May 2019, but the pain became unbearable after our move (hello, stress and grief, and, yes, more disc degeneration.)

An MRI from December 2020 had pinpointed “severe facet arthritis bilaterally” at L4-5, and mild to moderate facet damage elsewhere. I had tried everything from PT to Pilates, from massage to medical marijuana, but what seems to have made the biggest difference is the Gokhale Method, which attempts to reteach the body how to do the work of everyday life without further degrading our discs.

I was skeptical about how much I could actually learn online from a Gokhale coach, given that postural work benefits from hands-on adjustments and corrections. But with COVID-19 raging, this is not the time for in-person classes. Happily for me, my coach was terrific, and after completing the 18 introductory classes, I’m feeling so much better. It’s definitely not a magic bullet, but it’s the best thing I’ve tried so far, and I want to believe that if I keep it up, I’ll eventually be pain free. Here’s hoping I can report that next year.

Seven months later, I am thrilled to say that I am indeed pain-free and living a full life that enables me to care for my family, return to writing, and relaunch my health coaching practice that I had put on hold due to the pandemic and pain.

My recovery has been so complete that in May I undertook training to become a certified canoe instructor and am now teaching at the American Canoe Association’s Camp Sebago in New York. 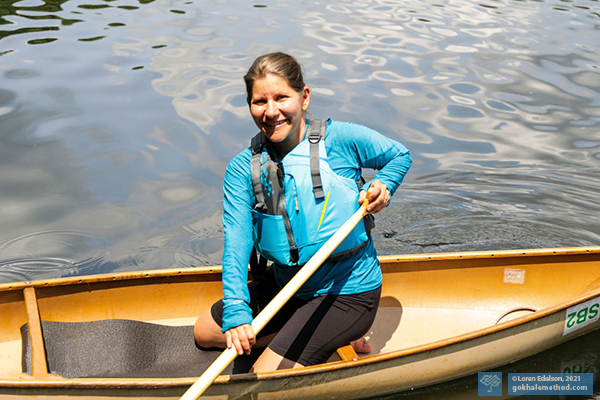 Now free from back pain and sciatica I am once again able to canoe.

Even though I feel great, I know that wellness takes regular work, and I’m grateful for the ongoing Gokhale Exercise program. Gokhale Fitness teacher Eric Fernandez has gotten me to enjoy strength training; teachers Kathleen O’Donohue and Roberta Cooks are responsible for me incorporating Moving Meditation into my morning routine, while Esther’s daily 1-2-3 Move program has rekindled my love of dance and taught me steps from traditions that include bharata natyam, samba, capoeira, 50s rock, and reggae. Joan Baez’s music is a fave—she is a student of Esther’s and will often be dancing on the screen with the rest of us. 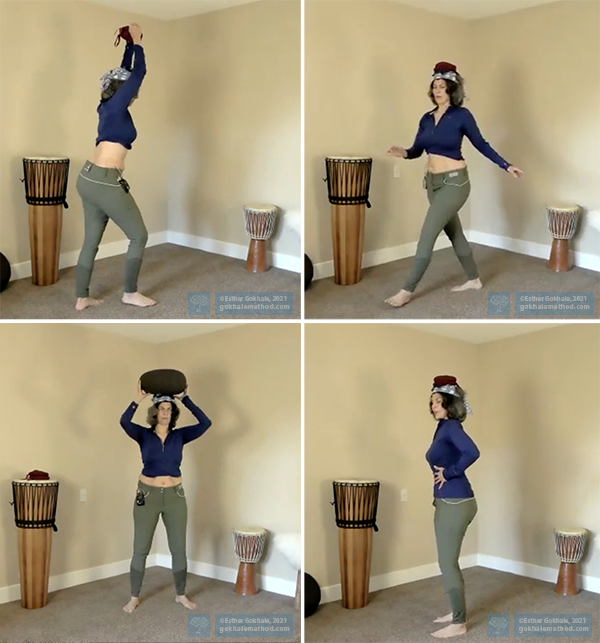 Head-loading is a fun way to practice many important posture principles, shown here on the 1-2-3 Move program.

Esther will also occasionally focus on yoga asanas and offer modifications that have enabled me to safely return to a yoga practice. If you see me balancing boxes (or my canoe) on my head, it’s thanks to all the practice I’ve now had with the Gokhale™ Head Cushion, gently “head-loading” my way to a taller, healthier neck. Thanks to the Gokhale Pain-Free™ Chair and Gokhale Stretchsit® Cushion, I’m also able to sit well at my desk and to drive long distances without pain, something that was impossible seven months ago.

1-2-3 Move often features artefacts such as Greek statues, Indian deities, or photographs of people from different cultures going about their work. Esther points out that examples of healthy posture by Americans are more readily found some generations back, in works such as those by Grant Wood or Winslow Homer.

My favorite class was the one devoted to the Hindu deity Ganesh, who takes the form of an elephant with a pot belly. While dancing to the “Ballad of Ganesha” by Lil Darkie, we took a cue from Ganesh, who holds himself beautifully, despite his roly-poly largesse. Esther talked about how strong abs are something that everyone, no matter what size, can cultivate. If Ganesh can carry himself well, the rest of us can do so as well. She made a similar point using images of Japanese sumo wrestlers. I deeply appreciate that Esther, raised in India by her Dutch mother and Indian father, takes a global perspective on healing. 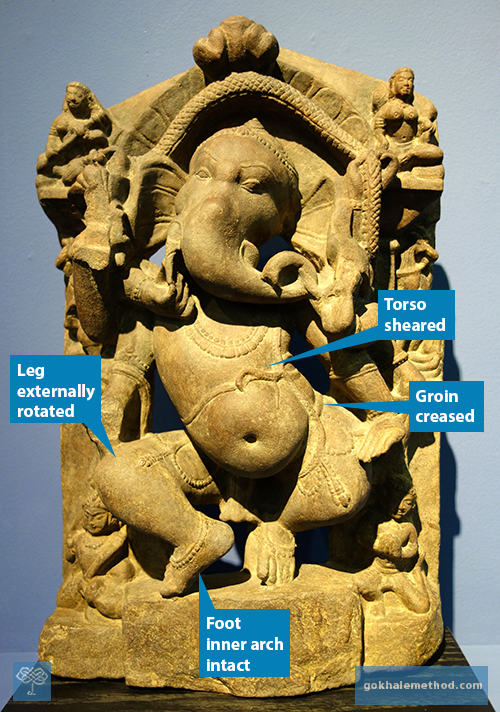 Tier 1 includes community support, something that is available in any Gokhale Method group class. These social and emotional components of healing, and the importance of surrounding yourself with healthy posture cues from people, artwork, and music, are frequently discussed during the Q&A on the 1-2-3 Move program.

In this 1-2-3 Move video, Esther shows how traditional artefacts such as shadow puppets from Java, Indonesia,
inspire us to free our arms and open the chest.

The Gokhale Method is not against appropriate medication or procedures. Back in February when I was still having some pain upon waking every morning, I asked Esther what she thought of “injections” as a way to mitigate this. To my surprise she said that she sometimes suggests that her students consider this “Tier 3” approach, but only after they have tried “Tier 1” first. Medical interventions such as injections and painkillers can create a window of pain-relief that enables students to learn to improve their posture and address the root cause of their problem.

I had already had an injection into my SI joint the previous September, which didn’t give me any relief. So I booked a one-on-one appointment with Esther, who pinpointed an excessive curve in my lumbar area. The transformation I brought about in my spine led to me being used as an example of progress in a blog post about spine shape. 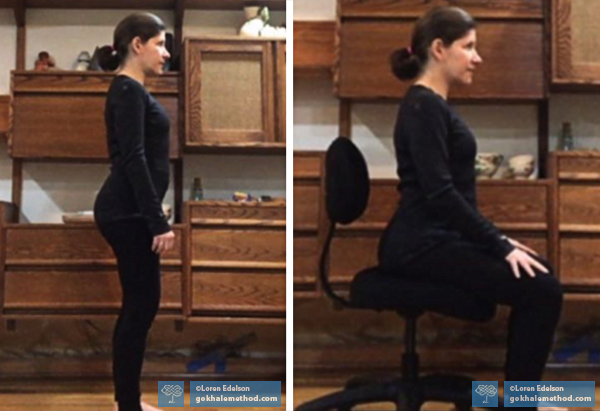 My “before” (above) and “after” (below) Elements photos show a considerable change from an S-spine towards a J-spine. You can read more about spine shape here.

With ongoing attention to creating more of a J-spine and less of an S-spine I no longer have pain. Perhaps even more importantly, I have greater trust that my body, with the right support, can heal.

Loren Edelson is a Functional Nutrition and Lifestyle Practitioner who writes Given the Givens, a bimonthly newsletter on reaching our full potential, even after receiving a life-changing diagnosis. To subscribe, visit https://loren6c2.substack.com/welcome

Beautiful story! I myself

Beautiful story! I myself bought the book and practiced it carefully since May and tho Im not completely pain free I managed to accomplish incredible milestones. I've carried all of my heavy luggage while moving out up to the 4th floor apartament, 10 times! And because I used the primal posture to do it I had no issues whatsoever.

Wonderful story Loren. Congratulations on such great results!! You always inspire with your insights and enthusiasm in the exercise class. Deborah

So true! And always with

So true! And always with exuberance and an infectious smile...

Loren, you so beautiful and

Loren, you so beautiful and throughly expressed the benefits of the Gokhale method. Thank you for sharing your before and after photos. It is equally helpful to see incorrect postures as the best postures. Susan

Thanks for sharing your story

Thanks for sharing your story, Lauren. And congratulations on your progress.   I love your dancing in all your different settings.  Mary

Thank you for your kind words

Thank you for your kind words, Mary, Susan, Deb, Osc, and Esther. i'm writing about the Gokhale Method in my blog "Given the Givens" tomorrow as well, so hopefully there will be more new faces in the exercise programs (and Elements, etc) in the coming weeks.