Why chimps don't pitch in Major, Minor, or Little Leagues

Baseball season is well underway and the 2014 All Star Game will soon be upon us. As always, power and precision pitching will be key, which is one reason why not a single chimpanzee will find himself in either of the All Star Team rotations. Given that adult chimps are overall stronger than even the most powerful baseball players, how can it be that a chimp’s “fast” ball clocks in at only about 20 miles per hour, whereas today’s Major League pitchers routinely throw balls at 90-100 mph.

Why chimp strength doesn’t translate into throwing a fastball–and why relatively weak human beings are so much better at powerfully and accurately throwing–is a line of questioning anthropologist Neil T. Roach and a team of researchers set out to explore. Their findings–reported in “Elastic energy storage in the shoulder and the evolution of high-speed throwing in Homo,” a study published last year in Nature, is what inspires this post. For a wonderfully engaging overview, take a look at this 2-minute video.

The ability to throw was necessary for our survival

Baseball pitching is akin to how our hominid ancestors threw weapons and, as noted in the video, because Homo erectus  was relatively weak and defenseless, the ability to throw with speed and accuracy was really key. Think about it: Without the clawed paws and fangs of saber-toothed cats and other fierce predators who shared our ancestors’ Pleistocene world, the ability to hurl objects with force and precision was necessary to their very survival. 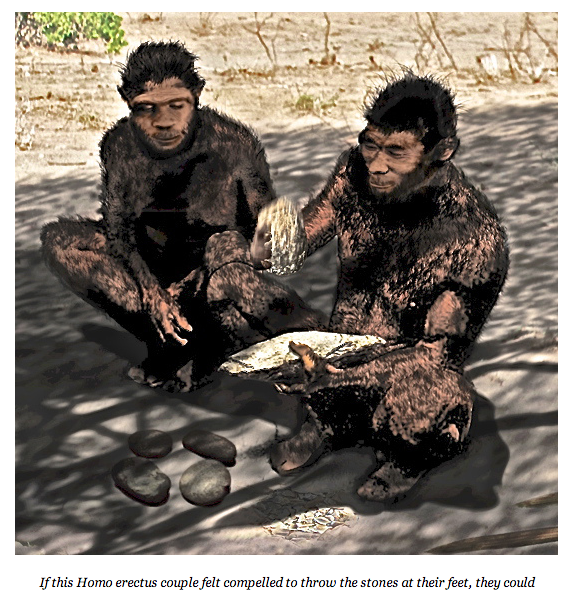 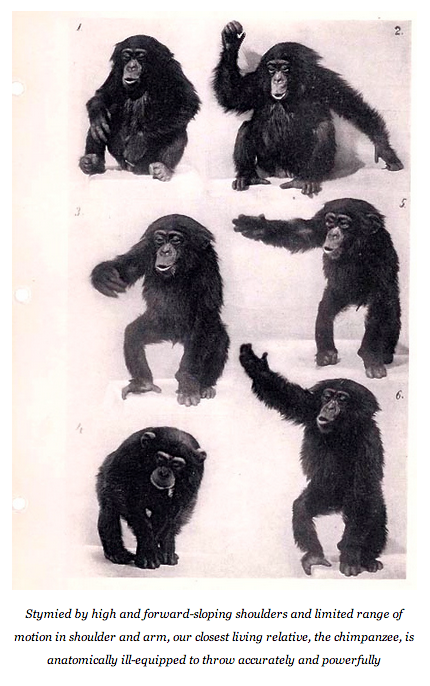 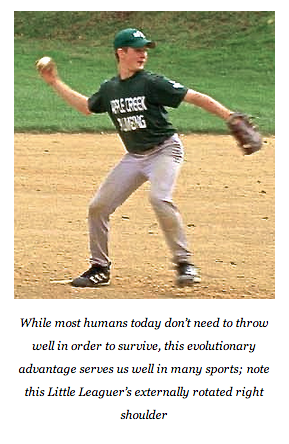 John Shea, a paleoanthropologist at Stony Brook University who was not involved in the “elastic energy” study, but who conducts tool-use experiments in an attempt to reconstruct human behavior through the analysis of stone tools, believes that spears date back 400,000 years. 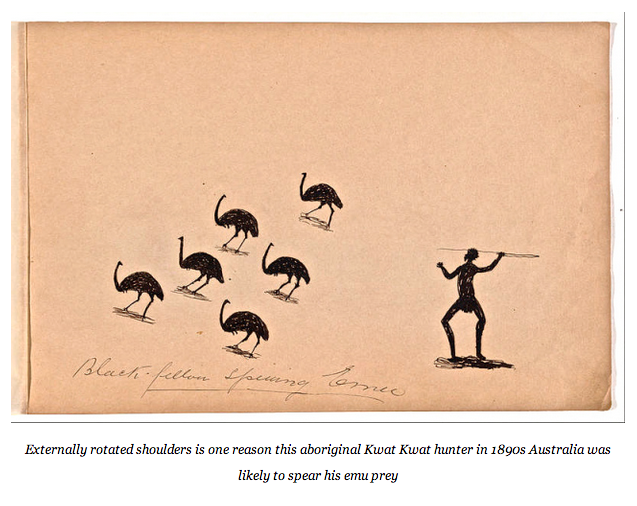 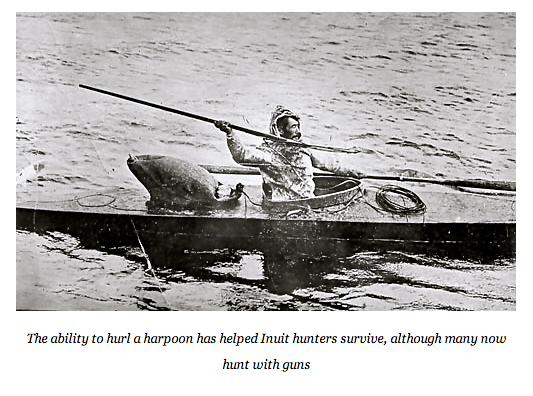 Shea also points out that Homo erectus was a good runner. “You put these things together and you have the primate equivalent of a fighter jet — something that can run for a long time, and has projectile weapons on board.” He also observes that while archaeologists have frequently found “hand-grenade-sized stones” along with skeletons from that era, new findings suggest that those stones may have been used by ancient humans as weapons to hunt and chase away other predators from their kill. 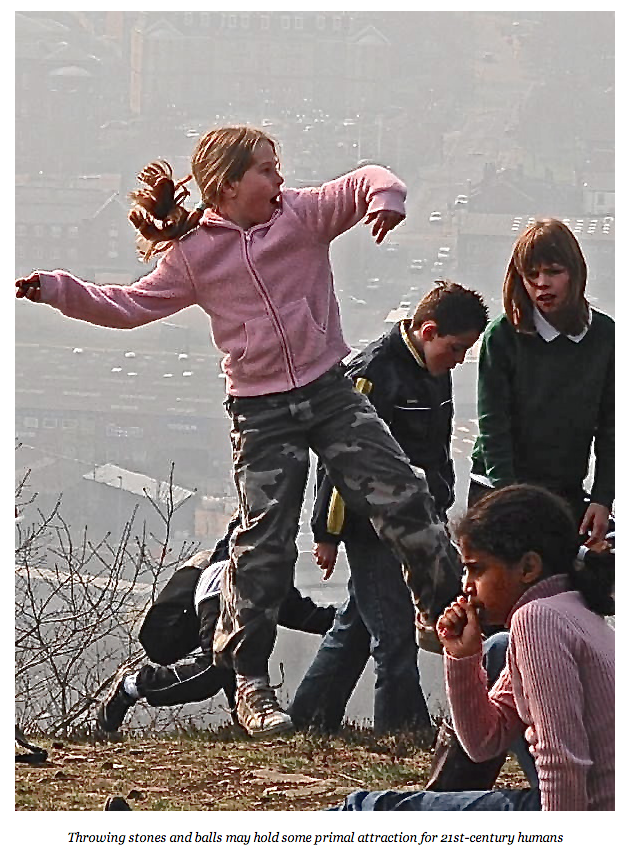 As you saw in the “Why chimps don’t play baseball” Nature video, above, Neil Roach and his team applied reflective markers to the shoulders, elbows, wrists, and waists of 20 college athletes, then used 3-D cameras to film the young men throwing baseballs at a target. Subsequent analysis of the footage showed that the sling-shot action of the shoulder, where criss-crossed ligaments and tendons store elastic energy as the athletes cock their throwing arms and prepare to pitch, is really crucial. Also really key is the subsequent release of this energy in the arm’s follow-through forward motion. 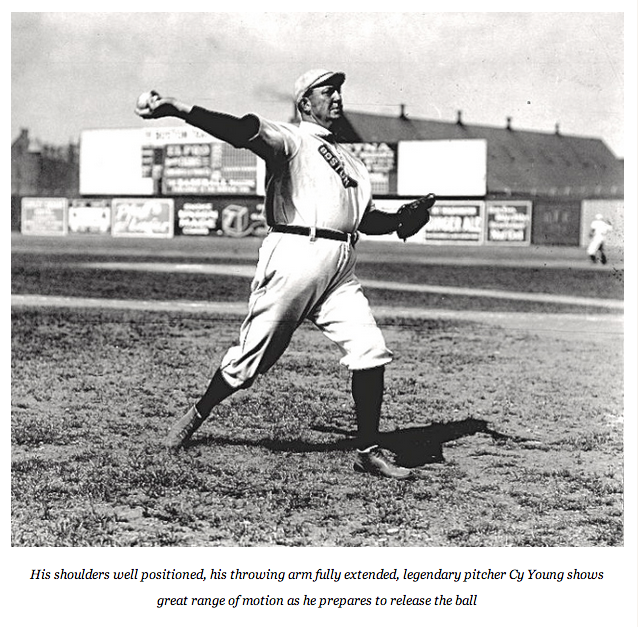 Of these adaptations, the organization of the shoulder blades is the most sensitive to posture shifts and Gokhale Method techniques. The front- and back-view composite illustrations below illustrate the differences between chimpanzee and human shoulders.

Poor posture undermines evolutionary advantages and predisposes us to injury

Many common postural distortions in modern societies take us backward in time and undermine some of the anatomical and physiological advantages we have accrued over millennia. It’s also true that some of these advantages, if not supported by healthy usage, can expose us to injury. We can’t take these advantages for granted; human beings require cultural tending–healthy modeling and molding behaviors that are so fundamental to healthy posture. (Molding involves tactile input–holding a child well, choosing a good office chair; modeling is visual.) 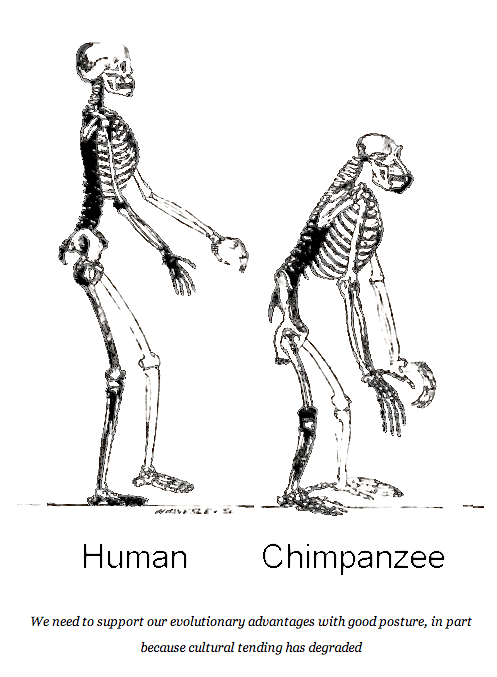 Bottom line: When we compromise our posture, we lose some of our evolutionary edge.

To zero in on just one example of “posture degradation” as it relates to the Gokhale Method, too many people today internally rotate their shoulders. This modern deterioration of posture results in the forward hunching that gives rise to the additional handicaps of contracted pectoral muscles and stiffness in the muscles between the ribs. Internal rotation also reduces healthy circulation through our arms, our capacity to breathe, and our capacity to throw! 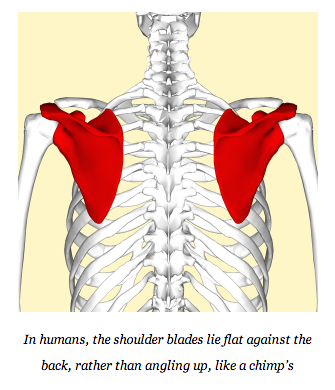 Tags:
throwing
pitching
shoulder roll
baseball
softball
Homo erectus
pitchers
Like what you read and want more? Sign up for our newsletter!

First heard of you and you

First heard of you and you method on NPR about 5 weeks ago...you had me at the crossroads of cultural anthropolog, art history and back pain relief. I have two damaged shoulders and 3?? fused discs mid-spine.  Can't be specific because I injured myself in Japan and was happily mistakenly taken to a karate dojo for treatment.  Spent 26 years there and availed myself of numerous alternative meth of keeping my pain at bay.

Fascinating article.  I hav had shoulder problems since I was 19 but was told by a western doctor that, if you were a pro, we'd operate, but you can learn to live with it."  Best bad advice I ever got, in retort.

Have signed up for Kripalu July 29 and hope to thank you in person...after 4 days, I had a tectonic  plate shift in lower back and am pain free for first time in 43 years.  And improving every day.

I am presently a dog walker, so I can't wait to get tips on how best to bend while tethered to dogs and how best to walk up and down hills.

Looking forward to meeting you in Stockbridge, MA next week!