A New Perspective on the Neanderthal Spine

October 16 is World Spine Day, which makes this the perfect time to share with you a fascinating piece of recent research about the human spine.

In April I was contacted by Scott Williams PhD, Associate Professor at the Center for the Study of Human Origins, Department of Anthropology, New York University. He and his team of anthropologists had recently published a scientific paper— which concluded that understanding the spines of Neanderthals, a human ancestor, may explain the back pain experienced by humans today.

Who were the Neanderthals?

The Neanderthals populated Europe and Asia between about 400,00 and 40,000 years ago. Neanderthals became extinct, but are considered one of our most recent evolutionary ancestors. Research shows there is DNA evidence that they interbred with early human populations¹. 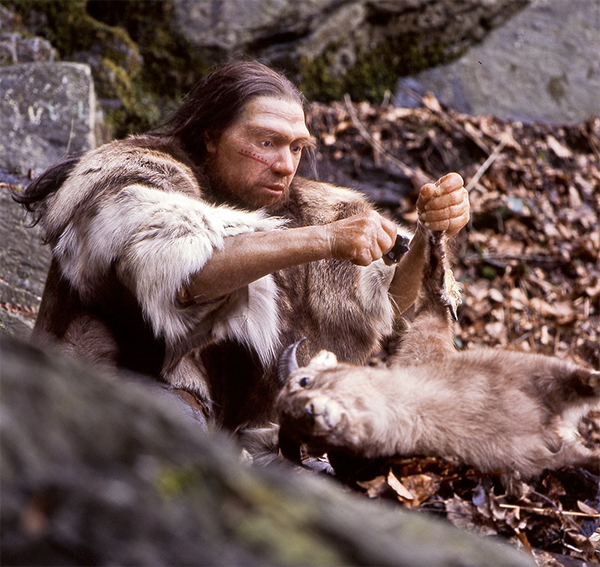 The Neanderthals were adept hunters who controlled fire and made shelters, clothing, and artifacts. Wikimedia 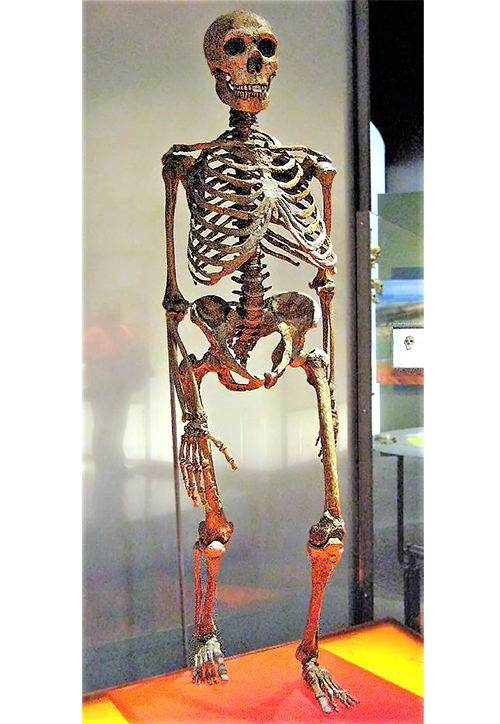 The Neanderthal skeleton was shorter, and its bones heftier and more robust than those of modern humans. Rather than being a hunched “caveman,” recent research suggests their posture may have been entirely upright. Wikimedia

Examination of the bones of Neanderthal lumbar spines has indicated that they curved less in the lumbar area than modern human spines studied in the U.S. and Europe. Because a significant degree of lumbar curve has commonly been associated with the ability of bipedal humanity to stand upright, Neanderthals have long been assumed to have had an intrinsically different posture from modern humans.

However, Professor Williams was able to come to a different conclusion because, like the Gokhale Method®, he realized that “modern” human posture itself has been subject to change in just the past few hundred years.

Williams and his colleagues compared preindustrial to postindustrial spines of male and female modern humans from around the world against samples of Neanderthal spines. His samples included more than 300 spines—that’s more than 1,600 vertebrae.

Williams acknowledges that because lower back curvature is made up of soft tissues (i.e., intervertebral discs), not just bones, their spine shape cannot be known with certainty. “The bones are often all that is preserved in fossils, so it’s all we have to work with,” he adds. Nonetheless, the distinctions in spine formation that Williams and his team found strongly suggest different degrees of curvature.

Williams’ research indicates that there has not been just a one-time dominant spine shape in modern humans, but that spine shape changed over the period of the industrial revolution. Overall, Williams found that spines in postindustrial people showed more lumbar wedging (which produces curvature) than did those in pre-industrial people. 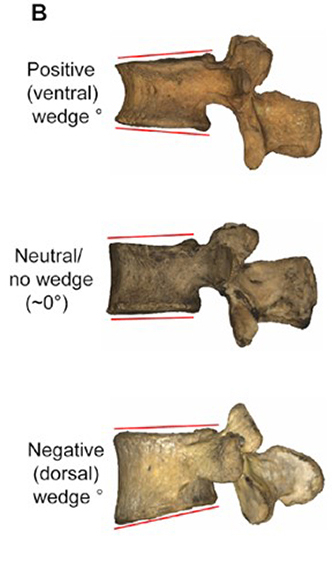 This illustration detail from Professor Williams’ paper shows increasing, unchanged, and diminishing angles of wedging towards the back of lumbar vertebrae (B). Academic.oup.com

Past research has shown that higher rates of low back pain are associated with urban areas and especially in ‘enclosed workshop’ settings where employees maintain tedious and painful work postures, such as constantly sitting on stools in a forward leaning position. . . A pre-industrial vs. post-industrial lifestyle is the important factor.

Research fits with the Gokhale Method

In his paper Williams cited my book, 8 Steps to a Pain-Free Back, as it details how posture and spine shape have changed progressively since the industrial revolution. It explains that industrialization led to the break in transmission of traditional ways of living and working. For example, people have always sat to do tasks—but it’s how they sat that changed and caused problems. 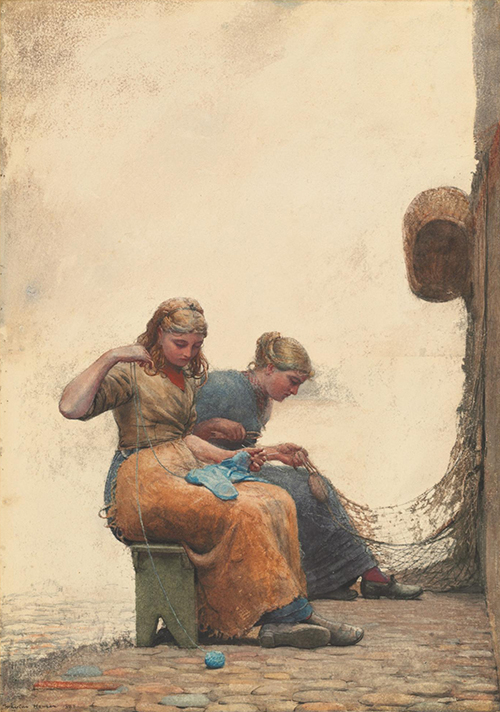 Human beings have always sat to do tasks, from nursing infants to decorating artifacts. The important thing is to sit well. Winslow Homer, Mending the Nets, 1882 (detail). nga.gov

Industrialization also resulted in new but mistaken paradigms of “natural” spine shape in furniture design, fashion, and even medicine. My book advocates for the J-shaped, pre-industrial spine rather than the  postindustrial, S-shaped spine, which causes lumbar compression, wear and tear, and pain. You can read more about spine shape here.

The Gokhale Method advocacy for the J-shape is based on observing that it remains intact in our children, largely in our track and field athletes, and consistently in adults living in non-industrialized regions or in traditional societies. And these people report significantly less back pain than the 80% of American adults who suffer incapacity with back pain at some point in their lives. 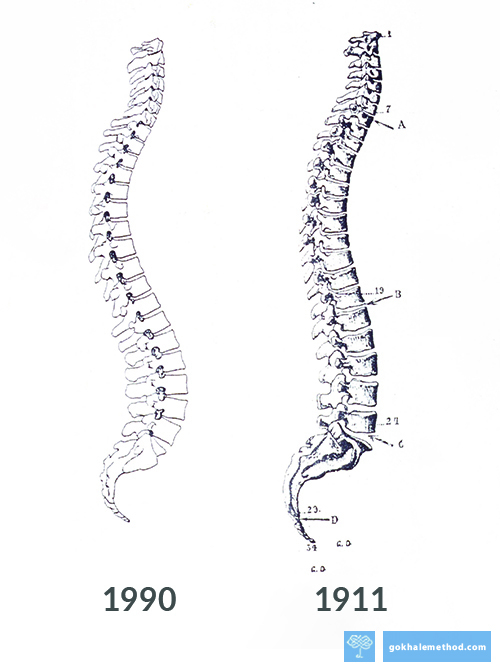 This illustration from 8 Steps to a Pain-Free Back shows the more recent S-shape spine (left) that would likely create “wedging” in the intervertebral discs and bones subject to extra curvature, and the earlier J-shape spine that does not have this compression (right) .

Conclusions about the Neanderthal spine and understanding modern back pain

Williams’ research concludes that the Neanderthals’ spines were significantly different from those of postindustrial people but not from pre-industrial people. By examining only the spines from modern people who lived in the industrialized world, past researchers have mistakenly assumed that the distinctions between Neanderthal and modern spine shape were due to evolutionary development rather than social and cultural changes. Williams says:

Diminished physical activity levels, bad posture, and the use of furniture, among other changes in lifestyle that accompanied industrialization, resulted, over time, in inadequate soft tissue structures to support lumbar lordosis during development. To compensate, our lower-back bones have taken on more wedging than our pre-industrial and Neanderthal predecessors, potentially contributing to the frequency of lower back pain we find in post-industrial societies. 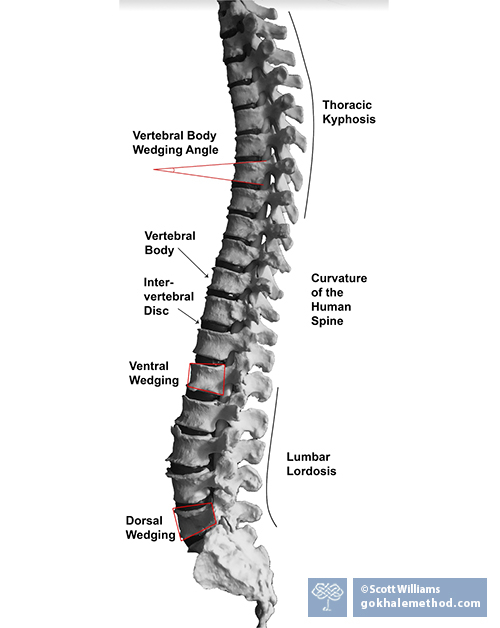 This illustration shows how angles of vertebral wedging contribute to spinal curvature.

The idea that the lumbar spine of our Neanderthal ancestors was relatively straight is not so shocking to those of us who already recognize that it makes sense for bipedal spinal health. And the wedging of the postindustrial vertebral bones is a fascinating discovery, which shows the degree of adaptation possible within the human body, although it is clearly not preventing back pain!

The evolution of humankind has been associated with changing posture in many versions of this cartoon. Pinterest

This fascinating research suggests an ancient and more natural way to be which, while preserved in some parts of the world, we’ve largely lost in our culture. But it can be and is being relearned. If you would like guidance on any aspect of your posture and spine shape, consider scheduling an Initial Consultation, online or in person, with a Gokhale Method teacher.

If you would like to find out more about how the Gokhale Method can help support you, sign up to join one of our upcoming FREE Online Workshops…