I was 27 years old and in a hot yoga class when I felt something shift in my lower back. That was the start of my back pain. After resting and icing for a couple of weeks, I went to physical therapy and was told that my SI (sacroiliac) joint was the culprit. Physical therapy exacerbated my pain, so I stopped going. Three months later, the pain subsided, but would return in certain movements. Yoga poses, including the plank and bridge poses recommended by my physical therapist, caused pain, so with great disappointment I stopped practicing yoga. I’d already stopped swimming and playing tennis due to impingement syndrome in my right shoulder, which my physical therapy hadn’t helped either. My exercise options dwindled down to walking. 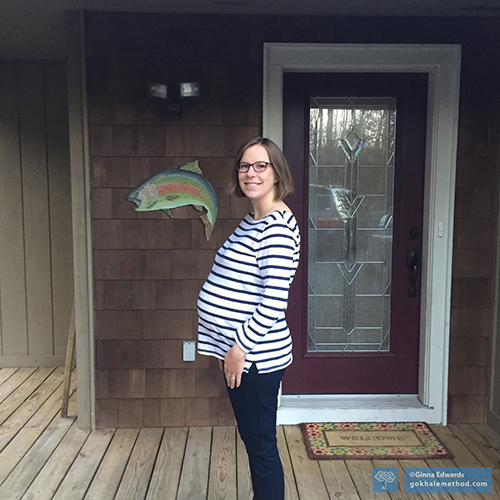 Ginna, pregnant with her daughter, Mary Frances. Pregnancy often exaggerates any tendency to lock out the legs and sway the back. This can cause compression of the tissues in the lower back, which include the nerves which go to the legs.

A few months later I got pregnant; all was well for the first three months and then my back pain returned with a vengeance. I put canned foods, pots, and pans on the kitchen countertop so I wouldn’t have to bend down. I iced my back on the way to work, on my lunch break, and on my commute home. A new physical therapist diagnosed an L5-S1 disc issue, even though it was the same pain that my last physical therapist attributed to my SI joint. Once again, physical therapy didn’t help.

Thankfully, the pain largely resolved when I delivered my baby girl, but I still had to treat my back gingerly as the pain would return with yoga, dance parties with my baby, etc. I eventually resigned myself to the fact that I would always have a bad back. 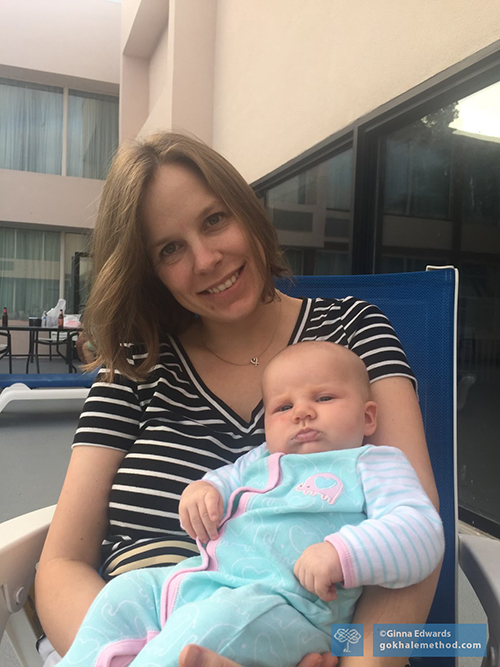 Ginna enjoying her baby. Unfortunately, mothers in our culture receive little to no guidance on nursing their babies with healthy posture. The result is often rounding in the upper back, and muscular aches and pains.

In November 2019, after nursing my daughter for 18 months with poor posture, I developed neck pain. Cooking and working in the kitchen made it worse; feeding my family became a miserable chore. I tried physical therapy again with yet another therapist, and after doing the exercises religiously for seven months with no relief, I stopped. 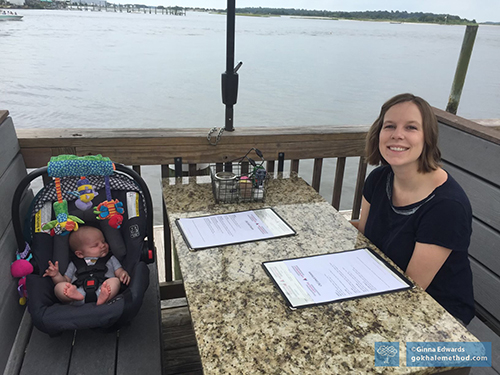 By taking the Gokhale Elements course, Ginna learned that addressing her posture is more effective than isolated exercises. She no longer hunches or compresses her neck as seen here.

In addition to neck pain, I also began experiencing numbness and tingling first in my arms, and later in my legs as well. After a couple of months, the numbness in my legs became painful. I had a hard time walking around my house and walking around the block was out of the question. I felt like my life was going downhill at the ripe age of 30!

I had a nerve conduction study with EMG (electromyography) , which showed severe nerve damage to both legs. My neurologist said the nerves would likely never fully heal. I talked with a friend who for a period of time had lost the use of both legs due to transverse myelitis, but thankfully, is able to walk and even jog now. Her neurologist at Johns Hopkins recommended a guided visualization where she “talks to her legs.” I decided to give it a try. I made recordings in which I prompted myself to imagine walking down the Greenway (a local bike path) on a beautiful spring day with my husband and my daughter. I asked my brain to send increased blood supply to the affected nerves in my legs. I told myself I would heal. I drifted off to sleep listening to this recording every night. It could be a coincidence, but shortly after that, I noticed that my legs were improving. At my neurology visit a few months later, my nerve study was back to normal. I still had mild compression neuropathies in my arms and legs, but I could walk and even run! 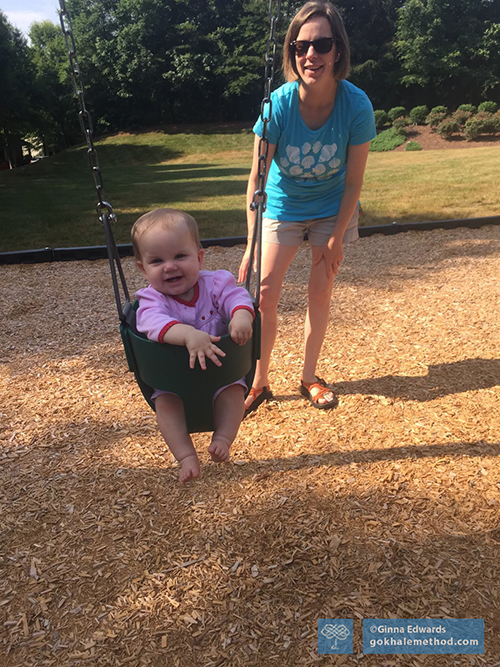 Bending with a rounded back and tucked pelvis can cause injury in the lower body.
Unfortunately, most people in industrialized cultures bend this way.

After a myriad of tests to determine the cause of my neuropathy, I was diagnosed with idiopathic peripheral neuropathy, meaning that the cause is unknown. My neurologist said that around 30% of peripheral neuropathy cases are idiopathic. Part of the neuropathy workup included a lumbar spine MRI, which was normal. My discs looked great. This again suggested that my back pain was due to my SI joint after all. I found a physical therapist who specializes in the SI joint. He gave me exercises to rotate my SI joint back into place and recommended using an SI belt. This maneuver to bring my pelvis back into place exacerbated my back pain. I wasn’t sure if the pain was because my muscles had to get used to their new normal placement or because my SI joint was not yet in place. Once again, I just felt confused by my situation.

In my Initial Consultation, Esther showed me how my posture, including in sitting,
was likely to be the cause of some of my challenges.

After thinking about it for almost a year, I decided to sign up for an online Initial Consultation with Esther. I’d found the Gokhale Method online and it seemed promising, but there are endless so-called “back pain cures” you can find with a Google search, so I was wary. However, the reviews were excellent, and my neck pain wasn’t getting any better. I hoped that the Gokhale Method might help heal my SI joint. Esther’s story about how she had overcome a failed herniated disc surgery and gone on to have two more children gave me hope. What Esther said about my posture in the Initial Consultation made a lot of sense, and so I signed up for the online Elements course. 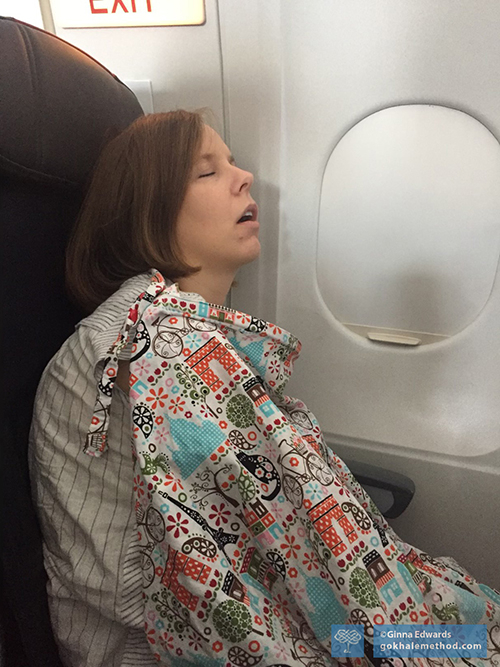 In an exhausted new mom, exaggerated curves in the upper back and neck can cause compression of the nerves which go to the arms.

A few weeks into the course, my neck pain resolved. In addition to the lengthening and strengthening techniques taught in the course, Esther showed me a stretch that involves depressing one shoulder while lengthening the neck and looking slightly in the opposite direction. It was similar to a common neck stretch but with the important modification that I was stretching my muscles without loading my cervical discs. After a couple days of changing my neck posture and doing this stretch, my neck pain was gone. I was relieved and very excited that I could cook again for my family without neck pain.

After I finished the course, my SI joint was still a little painful. I went for daily glidewalks, trying to “make every step a rep,” as Esther had taught me. I also continued wearing my SI belt while building core strength through 1-2-3 Move and Gokhale Fitness with Eric and using my inner corset. I met with Gokhale Method teacher Aurelia Vaicekauskas for additional coaching after Elements, and she recommended focusing on building glute strength and continuing to incorporate glidewalking into my life.

In my Elements course with Esther, I learned ways to wake up and strengthen my glutes in preparation for glidewalking.
It was exciting to be making progress and feeling so much better!

Then, about two months after I took the Elements course, my back pain resolved. It happened pretty suddenly. One day, I had pain and the next day it was gone. I can now dance (and recently even jump!) without pain. I can do plank and bridge poses without back pain. I feel like I’m checking ailments off my list right and left! I still have some numbness a lot of days, and wearing socks is uncomfortable due to neuropathy, but I’m learning to live in my body as it is, joyfully and with gratitude, while continually working toward healing.

Next on my list is  getting rid of my compression neuropathies and right shoulder impingement syndrome and increasing my thoracic mobility. I also want to practice the  gentle neck shearing motion, improve my head carrying, and continue working on other aspects of the Gokhale Method.

Another goal is to get pregnant again. I now feel empowered to have a second baby. My body has been through a lot, but I am confident that I have the tools I need to manage another pregnancy well. I also have the camaraderie that I find in  the 1-2-3 Move program. Every morning, I look forward to checking my email and seeing what the day’s focus will be. I enjoy seeing Esther’s inspiring references to art and dancing to both new music and tunes I’ve known for years. I’m delighted as I watch the other 1-2-3 Move participants dance (I won’t call anyone out here, but there are a few of you whose awesome dance moves always make me smile!). My now two-year-old daughter, Mary Frances, likes to dance in class too. One morning recently when she woke up, the first thing she said was “I want to go dance with Ms. Esther!” I feel the same way. I’m incredibly thankful for the Gokhale Method—for ditching pain, gaining strength and hope, and for the community I have found. In the positive words of Esther: Onward and upward!

Thank you for sharing! This

Thank you for sharing! This is a beautiful success story! : D

Thank you for sharing. This

Thank you for sharing. This is super helpful for me. I live in Missouri and have been considering taking an online course for awhile now. Thank you :)