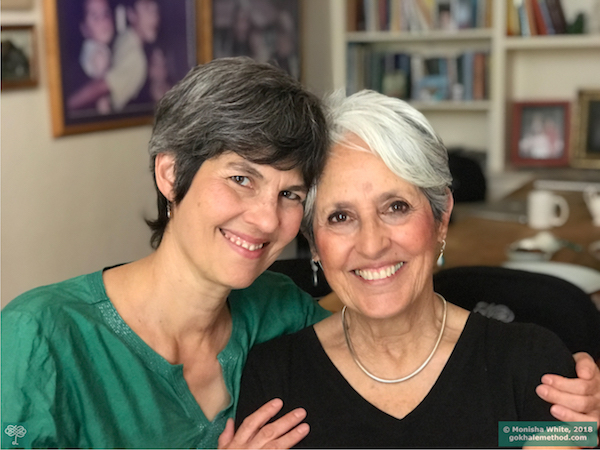 Feeling happy after a lesson.

If you ask Joan Baez what keeps her in good enough shape to do worldwide musical tours at age 78, she will hand you a little brown card that says “Esther Gokhale, Creator of the Gokhale Method.” 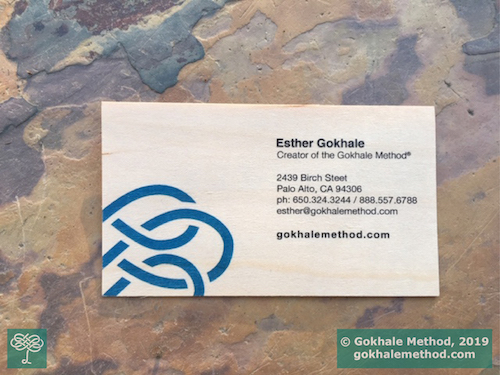 Joan has used various kinds of bodywork throughout her career. Music tours invariably involve bumpy bus rides, late-night performances, uncomfortable beds, and other challenges to the human frame, and Joan, like most seasoned musicians, has experienced her share of neck and back strain. Joan lives in California, the mecca of massage therapists, chiropractors, osteopaths, and other healers who smooth and soothe soft and hard tissue into more harmonious states. So it’s not surprising that she has found many helpful interventions and intervenors. But one stands out in getting to the root of her musculoskeletal challenges, and in altering the usual trajectory of wear and tear, degeneration and dysfunction. It’s the Gokhale Method. And thank goodness for the Gokhale Method, because there’s only one Joan Baez, and the world needs her right now, though she is at an age where we would expect her to be winding down. 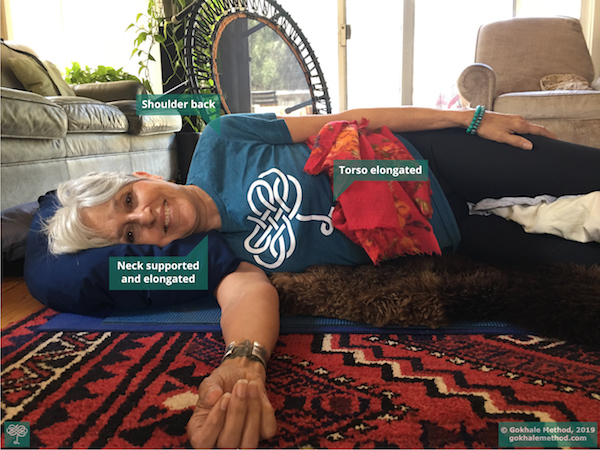 Joan stretchlying on her side, very relaxed and comfortable.

It’s been a treat to work with Joan. My interaction with Joan began after college in New York City, when I was involved in an organization called CRY (Child Relief and You). CRY was trying to raise money for central audio/video/media cultural centers in India so less-privileged youth could have access to video cameras, slide projectors, audio recorders, and other wonders of modern technology, which they could learn to use and which would keep them abreast of a useful aspect of the modern world. Joan Baez, whose music and mission had moved me deeply, seemed like the ideal person to craft an appeal to. I fantasized that she would do a concert in India and bring awareness to CRY’s mission. I spent quite some time crafting my letter, sent it (through someone who knew someone who knew someone) — and did not get a response. When I told Joan this story decades later, she said sadly, “We tried so hard to respond to the kids especially…” I assured her the letter probably got lost because it was sent by “hand delivery.”

Joan hip-hinging to pick lettuce. Notice how her externally rotated legs create space for her torso to settle between her legs. 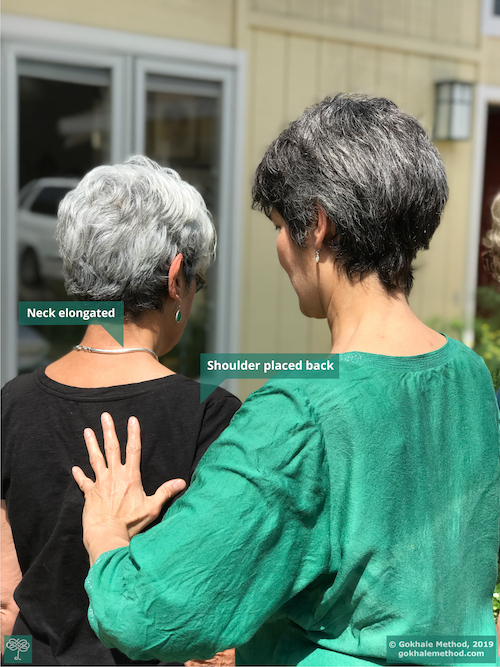 Shoulder rolls help the shoulders settle further back and further out from the body. Joan is enjoying having her shoulders return home.

I forget exactly how Joan, her buddy Jeanne, and her other buddy Karen ended up in my studio 11 years ago, in 2008. Each of them were able to use the Gokhale Method techniques to rid themselves of a deep-seated and seemingly inevitable degenerative symptom that many practitioners had been unable to give them relief from or hope around. Three for three was impressive to them. They decided I was the “real thing” and have championed my work since then. Joan gave me and the Gokhale Method a ringing endorsement, which we have since used on flyers and brochures to good effect.

After years of struggling with chronic neck and back pain, I had the good fortune of meeting Esther Gokhale, who introduced me to her Method. Although stunningly simple, Gokhale's Method turns much of conventional wisdom about pain and posture on its head. Each session of the course gave immediate results which have affected my life profoundly, and I now look forward to many years of a healthy neck and back. I would highly recommend that others seek out this very special woman, or read her book entitled 8 Steps to a Pain-Free Back.

In the course of our lessons together, Joan and I hit it off and became friends. My relationship with Joan continued at a sauntering pace, peppered with highlights like being invited with my entire family to her 70th birthday celebration at Teatro Zinzanni. This event, a comedic showcase employing impressive theatrical talent, will forever remain in my memory as our 16-year-old son Nathan was chosen to go up on stage and become a part of the spectacle. And spectacular it was, as well as bawdy, hilarious, and entirely “incorrect.” At the end of the evening, a woman came up to me and humorously remarked that she hoped we have enough saved up for therapy for the rest of our son’s life. Christine Deaver was the Maitresse d’ for the show. Christine is a large woman who owns every centimeter that she occupies. At one point in the evening, in joking with another volunteer she pointed out that her breast was larger than his entire bald head. The way she did it was very funny indeed. Nathan was one of three competitors for the role of Romeo against her Juliet.  There were several sections to the competition, including singing (for 200 guests) Mary Had a Little Lamb in a high-pitched falsetto, reciting a heavily adapted version of the balcony scene including lewd lines such as “I’ll come a-knockin’ when the balcony’s a-rockin’,” and the grand finale, in which all contenders had to pull a sword out of a scabbard to declare their love for Juliet. Christine expressed her disappointment in the limp and fallen-to-the-side swords of the other contenders, and approval of Nathan’s upstanding and sturdy sword. The show ended with Christine feeding a reclining Nathan grapes as their float circled around the stage. Oy vey. 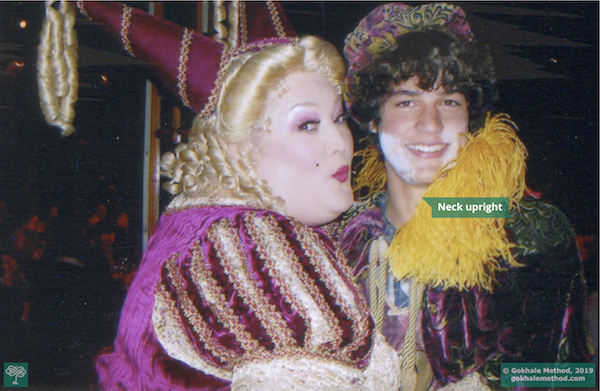 On another occasion, Joan invited me to her fundraiser concert with Emmylou Harris and Jackson Browne for the Downtown Streets team to support local homeless shelters. Vintage Joan in her sixth decade of supporting people in need — I felt so inspired.

There are many stories: too many to recount here. Suffice it to say that our friendship has truly been a delight. 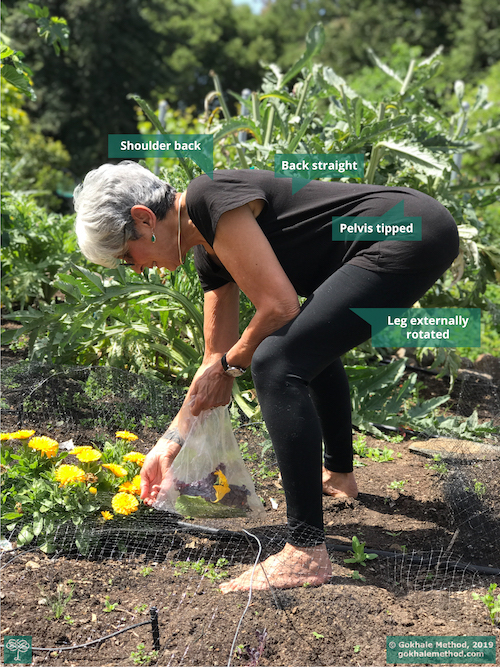 When hip-hinging for extended periods, like in a garden, it’s normal to rest on the knees as Joan demonstrates here.

In the last year, Joan has returned for refresher lessons. I feel lucky that Joan values my lessons. Joan ups my game. She inspires new turns of phrase, her paintings inspire posture lessons, we dance with good posture. And Joan helps me remember just how much is possible, well into your higher decades. 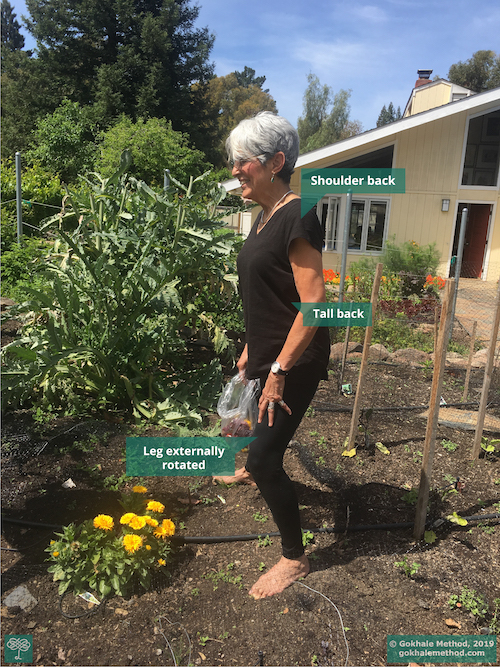 Joan in a “ready position,” preparing to hip-hinge to pick some calendula.

Tags:
Joan Baez
music
musician
friends
healthy aging
Hip Hinging
active lifestyle
on tour
Like what you read and want more? Sign up for our newsletter!

Esther...thank you so much for sharing your experiences with Joan.  She has been such an eye-witness and driving force behind so much history in my lifetime.  To say nothing of her musical talents.  My first memory of seing her live was walking up over the hill at Woodstock to the left of the stage being overwhelmed by the size of the crowd below and seeing her on stage in the spotlight with that unmistakeable voice...

Fast forward to last year September where I saw her in Boston.   I couldn't upload pictures here, but I will send them by e-mail and you can definitely see the fruits of your efforts in both her posture, stamina (she never sat down once) and  sound quality of her voice.  Thank you for allowing  her voice to continue to ring out...

Thanks for sharing. You have

Thanks for sharing. You have witnessed even more of her history than I have. She's quite a national (international, actually) treasure.

In the picture with the

In the picture with the caption about shoulder rolls, it seems to my eye that both Esther and Joan have their heads a bit forward. Is that true or am I not seeing it properly? It makes me wonder if a westerner can ever hope to acheive the head and neck position of the Burkina people pictured in Esther's books. Thoughts?

Keep Those Resolutions...and Have Fun! 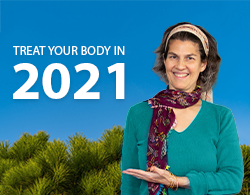 Did you enjoy our 5 free days of Gokhale Exercise? Keep that momentum going! Sign up here to continue your fitness journey with a membership of your very own and enjoy 55 live fitness classes a month to help you get fit without injury!