This story of a personal journey in correcting posture was kindly contributed by Gokhale Method student Debra Claire, of Madison, Wisconsin.

I’m grateful to be telling my Gokhale story, for the significant improvement I’ve gained. I developed postural problems early in life as the result of a visual loss at age 16. The loss came on gradually and led to a diagnosis that met the legal blindness criteria. To see, I’ve had to hold things close and often end up hunching over to make out what I’m working on, whether it’s chopping on a butcher block, writing at my desk, or working on my tablet. 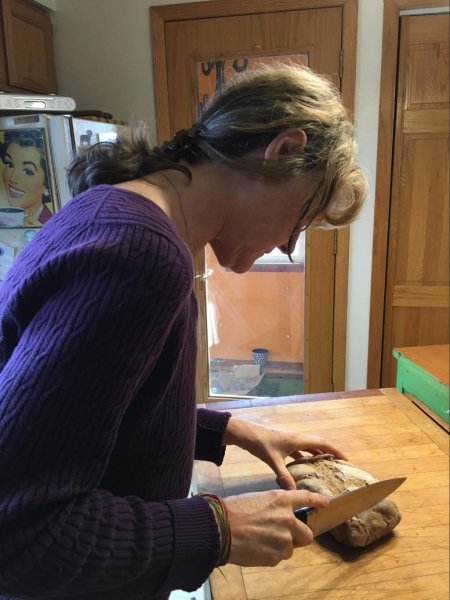 Looking back at wedding photos, I see even at age 30 my shoulders and head were already curving forward. As I’ve aged, I’ve begun to have soreness in my hips from arthritis. When all the physical stressors come together, my back muscles spasm. In addition, four years ago, I developed peripheral neuropathy from a B12 deficiency. The nerve pain in my feet and calves from this can be quite uncomfortable, with only moderate relief from prescribed medication.

Because of my vision impairment, I do not drive and have been very dependent on walking to get around. I am often on my feet all day, but with the cumulative effect of the structural problems, I would need to get off my feet after just a couple hours. Dancing, one of my favorite activities, had led to hip pain and so I had to cut back on it.

Neck, shoulder, and arm pain had become chronic from the bent-over position I’ve held over the years.

To relieve it, I’ve had many massages, trips to the chiropractor, physical therapy, yoga and other exercise classes, heated rice socks, pain-killers, and numerous anti-inflammatories such as turmeric and glucosamine. I’ve also favored nutritional approaches and have experimented with anti-inflammatory diets. There’s been temporary lessening of symptoms, but none has had a lasting, systemic impact.

IMPACT OF THE GOKHALE METHOD

Since conventional methods had such limited effects, I was getting ready to try acupuncture, as well as energetic and other more esoteric methods of healing. Then, I attended a free workshop this summer on the Gokhale Method and was intrigued. What if my discomfort, including nerve pain, was being caused by my poor posture? I found the descriptions of anatomical maladaptations common in the U.S. and the images of postures in other non-suffering cultures to be compelling. I immediately signed up for private lessons and devoted myself to the practices. I felt I would need the one-on-one lessons because I might not see what needed to be done in the group setting. At first, my body rebelled at the new way of moving and holding myself, but intuitively it felt right and I quickly rolled with it. Initially, I was a bit awkward, overdoing some of the postures. However, I grew excited over the sense of command I experienced over my body. My instructor, Doreen, was skilled and knew an impressive amount of detail about anatomy. The lessons were clear and specific. After 6 weeks, I had a spectacular recovery. I had assumed there would be some improvement in my skeletal structure, but only fantasized about improvement in the nerve pain. All of it lifted! I felt waves of relief at the reduction of pain. When I pulled weeds in the yard, I was able to sustain the effort much longer than in the past with the benefit of the hip-hinge. I now enjoy bending forward because it feels good. Additionally, to my surprise, I feel more confidence, agility, and solidity because I have better command of my stride. As my vision decreased, I had become more tentative in my movements. The progress I made with the Gokhale Method has given me back more assurance in maneuvering in the world.

To maintain my new, proper posture, Doreen suggested modifications to my home. Instead of stooping over my tablet, I now prop it up at eye level.

With this new modification to my home, I'm now encouraging an upright posture rather than setting myself up to hunch toward my task

Instead of hunching over to chop vegetables, I stand taller, using a modified knife that cuts set slices. I roll my shoulders multiple times a day. It all supports my postural health.

With some useful tools and modifications, I can go about my daily tasks without needing to compromise my body's structure

Although some symptoms show up occasionally, they are much more mild and don’t stay as long. I just returned from a fantasy trip to England. I credit this more authentic movement with allowing me to power cruise the amazing sights in iconic places for 8 days.

Taking on the Gokhale Method training was a big commitment, but I can’t think of anything more important than investing in one’s ability to walk and move from day to day. Now I’m even able to get back to dancing, and having fun with my belly dance classes! 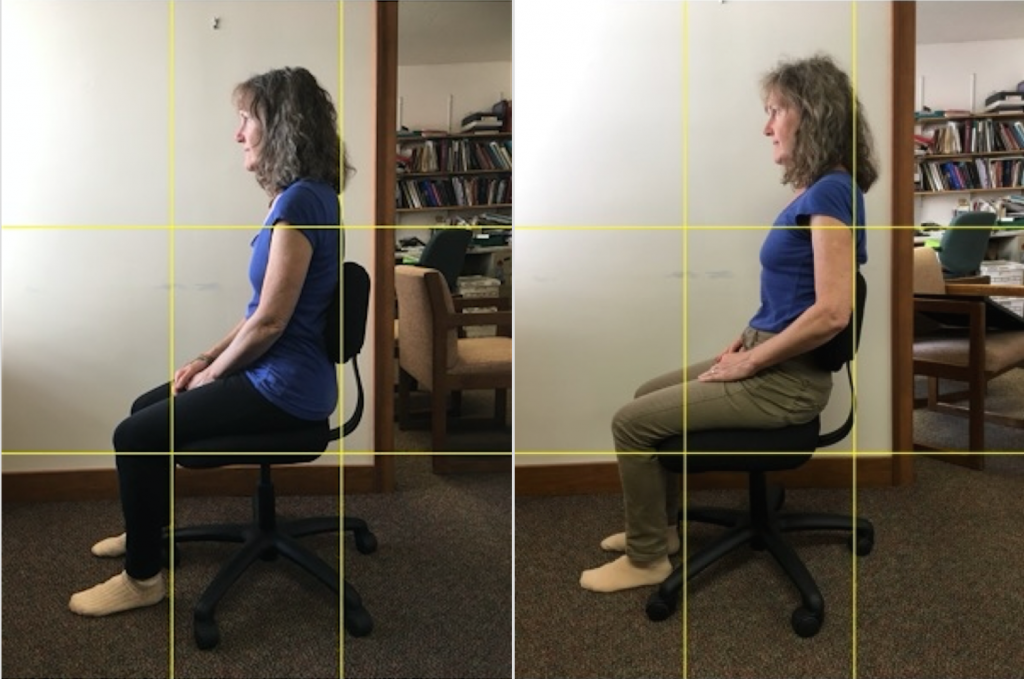 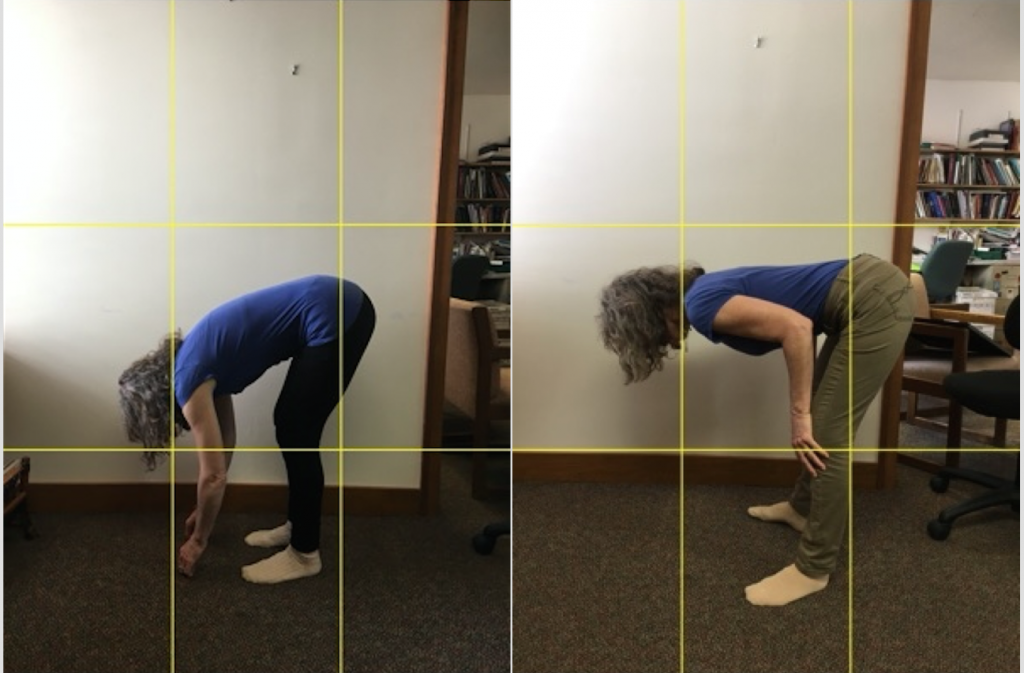 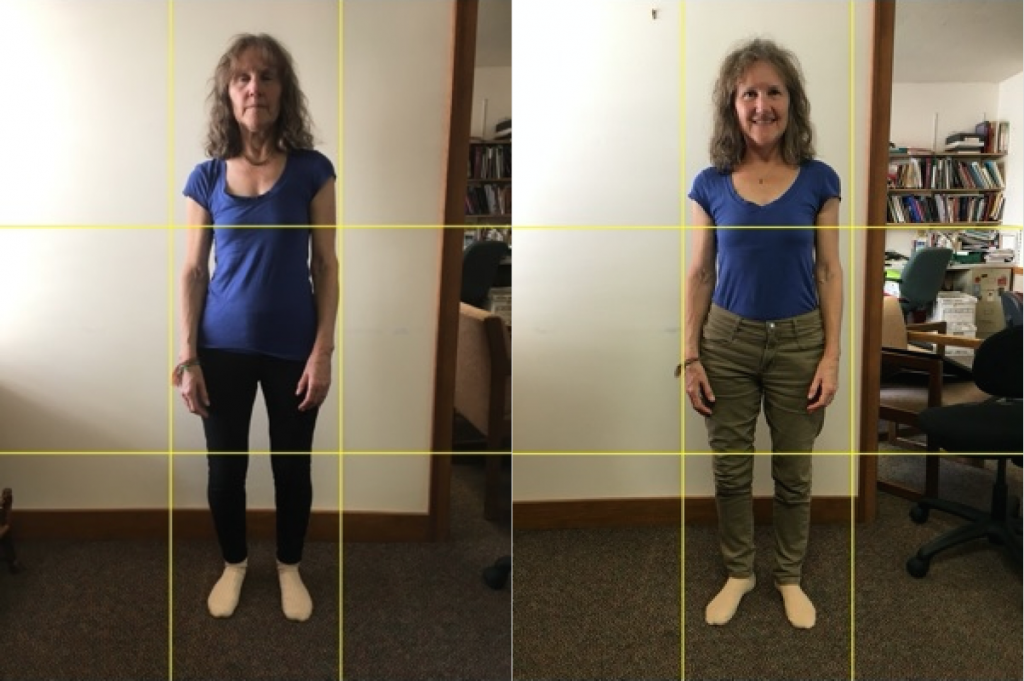 Hi Deb! Looking at your final

Looking at your final smile make me hear this words in my mind:

Thank you for sharing!

Dear Deb, Thanks tremendously for sharing the story of your posture journey. Your words and images have infused me with inspiration and potential. I'm especially buoyed by the Gokhale Method's reduction, then elimination, of your peripheral neuropathy (one condition that's also challenged me for many years). I embarked on my path to postural transformation this past weekend with a wonderful Foundations workshop with Cynthia Rose. Although the teachings are just starting to fillter more fully through my brain/body, I am at long last glimpsing the possibility of a "sea change" similar to the one you marvelously underwent. Great congratulations on your renewed comfort and ease, Devin

Way to go Deb!! Loved this

Way to go Deb!! Loved this story. Thanks!

Would you explain what we're

Would you explain what we're looking at in the before-and-after photos where Deb is seated and where she's standing facing front? Perhaps annotate the photos?

In the seated photos, to my eyes, her back looks straighter in the Before picture, with her behind nicely back in the chair. In the After photo, it looks like her pelvis is somewhat tucked. I can see that her arms are in a better position in the After photo but I don't quite know what to compare in the photos.

In the frontal photos, I don't see any difference.

Thanks for helping us

Thanks for helping us remember that not everyone sees what a teacher would see!

This is not the best view to know whether the pelvis is tucked or not, but with stretchsitting, it's doesn't matter unless the pevlis is super-tucked. In fact, it's important not to tip the pelvis forward too much in stretchsitting (as this could cause a sway when leaning back against the backrest)

Thank you so much for the

Thank you so much for the comments about what to look at in the photos. Now I can see a dramatic difference in the seated profile photos.

You are most welcome! We

You are most welcome! We educate the students in our courses to recognize healthy and unhealthy posture traits - it's useful to be reminded of how it looks to a beginner's eyes.

I too can now see what you

Permalink Submitted by [email protected] on May 31, 2018 - 2:59pm
I too can now see what you mention in the seated photos. I see your note about the pelvis being super-tucked being the primary concern ... but I thought that having one's butt "behind" the spine was key, pretty much across the board ... I guess this is not the case? If you have any more thoughts to add here, I'd be interested.